Brexit: UK told to uphold Belfast Agreement if it wants US trade 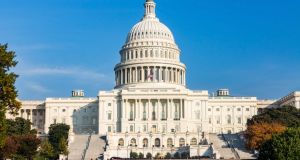 Figures from the Irish-American caucus on Capitol Hill said they would definitely speak out fi the Belfast Agreement was threatened.

Britain’s hope of striking a trade deal with the United States after Brexit could be in jeopardy if the Belfast Agreement is compromised by Britain’s withdrawal from the European Union, senior US figures have warned.

Speaking at an event in the United States Capitol building to mark the 100th anniversary of the Dáil, Republican congressman Peter King told an audience: “If the British want to consider any type of trade agreement with the United States it is important that the soft border is maintained.”

He continued: “What influence we have, we will use it, in the Friends of Ireland” he said, referring to the Irish-American caucus on Capitol Hill. “We will definitely speak out.”

His warning was echoed by Richard Neal, the Massachusetts congressman who was recently appointed chairman of the Ways and Means committee. The committee has sweeping powers over US trade policy, and would have ultimate oversight of any trade agreement signed between the United States and Britain after Brexit.

Speaking at the event, which was hosted to honour Tánaiste Simon Coveney who is on a three-day visit to the United States, Mr Neal said that concerns about the Belfast Agreement would “weigh on his mind” as his committee considers a new trade deal between the United States and Britain.

He said he has already outlined his concerns to the United States trade representative, Robert Lighthizer, although he ultimately wanted a trade deal between the US and United Kingdom.

“I think that America is heavily invested in the success of the Good Friday Agreement and anything that might disturb the success that America offered certainly would not be welcomed, that’s for sure. I think there are few parts of American foreign policy that have worked as well as being an honest broker in the run-up to the Good Friday Agreement, so we take great satisfaction in what happened and undoing it for a problem that appears as though the British government got themselves into, I think would be a step backwards.”

In addition to Mr Neal, two other Irish-Americans – Brendan Boyle of Pennsylvania and New York congressman Brian Higgins – are members of the committee.

Later, in a speech, Mr Neal commended the Irish Government for the stance it has taken in the Brexit negotiations. “The way that the Irish government has remained so firm on that border is so gratifying to us here,” he said, noting that all parties in Ireland and Northern Ireland except one were unified on the issue.

“It is extraordinary that that border has been as successful as it has been and there might even be a debate about going back to checkpoints,” he said.

Former congressman Bruce Morrison also warned Britain about the difficulties ahead in negotiating a trade agreement with the United States – a key priority for Brexiteers who have pointed to their ability to negotiate a future trade deal with the United States, and other non-EU countries, as a key economic benefit of leaving the EU customs union. The US is Britain’s main trading partner outside the EU bloc, and exports to the US are worth an estimated 100 billion pounds to the British economy each year.

“I think the British have made a lot of assumptions about trade agreements with the US and with other countries and frankly, from a hard-headed economic standpoint, dealing with the EU is a lot more important than dealing with Britain, so I think they have an uphill slog on that,” Mr Morrison said. “They’ve been talking to themselves and not talking to others in thinking how great it’s going to be to be out of the European Union.”

The intervention from Capitol Hill came hours after Mr Coveney held his first face-to-face meeting with US secretary of state Mike Pompeo at an event in the US State Department, at which the Minister for Foreign Affairs discussed the need to protect the peace process in the context of Brexit.

But Mr Coveney stressed that Ireland was not asking the United States to “take sides” amid increasing concern among the Irish-American caucus on Capitol Hill about the implications of Brexit on the Belfast Agreement.

“I made it very clear to him that we’re not asking the US to take sides – Ireland over the UK or UK over Ireland,” Mr Coveney said. “But we are asking people here to think about a peace process that they have been very much involved in creating and sustaining, and using influence to ensure that decisions that are taken in relation to Brexit don’t undermine that progress.”

Nonetheless, he said that Mr Pompeo, as well as representatives of other nations attending the global coalition against Isis on Wednesday, had discussed Brexit. “Obviously there have been a lot of questions today from US voices, but also many of the other ministers who were here today for the conference, all asking the same questions – where is this going, how can we avoid a no deal Brexit.”

Mr Coveney’s visit continues on Thursday with bilateral meetings with member of Congress about Brexit and its implications for the border with Northern Ireland.