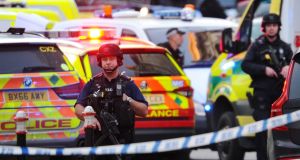 Armed police stand guard near the Monument in London after several people were injured in a terrorist incident in the British capital. The suspect was shot dead by police. Photograph: Daniel Sorabji/AFP via Getty

Two people were killed and a number of others injured in a terrorist attack near London Bridge on Friday. The suspect was wrestled to the ground by passersby and shot dead by police.

The suspect, who police say was wearing a fake suicide vest, was killed after emergency services were called to a stabbing incident at premises near the bridge shortly before 2pm on Friday.

The incident played out in extraordinary scenes that prompted praise for the bravery of members of the public and police. In footage captured by bystanders, civilians are seen wrestling with a person lying on the ground at the northern end of the bridge, before being pulled to safety by armed police arriving at the scene.

The suspect, dressed in black, then appeared to try to rise, before firearms officers fired two shots. One man wearing a suit appeared to have removed a large knife from the suspect before the shots were fired, and was filmed running down the road away from the scene gesturing at others to get back.

Police confirmed the suspect died at the scene. It is believed that he was acting alone.

All the casualties were taken to the Royal London hospital in Whitechapel, one of the capital’s four designated major trauma centres.

Prime minister Boris Johnson paid tribute to those involved in ending the attack and said “anybody involved in this crime and these attacks will be hunted down and brought to justice”.

“As soon as we can provide further updates on their condition we will,” Neil Basu, assistant commissioner of the Metropolitan police, said in a statement outside Scotland Yard. “Our heartfelt sympathies go out to everybody who’s been involved in this and is anxiously waiting for information on their loved ones. As soon as we can get that information we will get it to you.”

The mayor of London, Sadiq Khan, said later that no one else was being sought over the incident.

Due to initial reports that the suspect might have had an explosive device, wide cordons were in place to ensure there was no further danger to the public, Mr Basu said.

The incident, which sparked panicked scenes as crowds ran from the bridge and took shelter in nearby buildings, had echoes of the terrorist attack on the bridge in June 2017, in which eight people died.

On that occasion, terrorists drove a van into crowds crossing the bridge before attacking others with knives there and in neighbouring pubs and restaurants. Police shot three Islamist terrorists dead and they were found to be wearing fake suicide vests.

The national terrorist level was lowered from “severe” to “substantial” earlier this month.

One witness who was on a bus going over the bridge said she thought she saw a “stab vest or some sort of explosive vest” worn by the person lying on the bridge.

Karen Bosch, who was on a bus with her baby travelling along the bridge, told the Guardian: “We were coming southbound on the number 21. We had stopped at a bus stop and were pulling away when I noticed people running into and across the road. We saw people tussling or fighting, I thought there was a fight or a stabbing.

“Then the bus stopped and it was clear there were three police with guns struggling with one man, a tall man who had a dark jacket and beard. The next thing I saw was the man with the beard lying on ground and I heard two pops or shots. A spent Taser was also lying on the ground.”

Ms Bosch said she moved to a safer place on the bus. “We were on the other side of the carriageway but there was nothing between us and what was going on.

“The guy on the floor opened his jacket and police backed away really fast. I thought maybe it was a bomb vest and if that went off, we were so close. I was so worried about my baby.”

Yahoo News quoted one woman who said she had witnessed the incident from inside Fishmongers’ Hall, a conference and events venue at the northern end of the bridge.

The woman, who gave her name as Coralie, said: “I was in the building when I heard the screams and one girl ran towards me because she got stabbed in her arm and everyone inside the conference started to panic.”

The building was hosting an event marking the fifth anniversary of Learning Together, a Cambridge University project bringing together people in criminal justice and higher education institutions.

Cars and buses on the busy bridge were at a standstill, with a white lorry stopped diagonally across the lanes. Video footage showed police pointing guns at the lorry before moving to check its container.

The shooting of the suspect will now be investigated by the Independent Office for Police Conduct. By law, it has to examine all police shootings.

Mr Johnson thanked the emergency services and members of the public, and said in a tweet: “This is an appalling incident and all my thoughts are with the victims and their families.” He returned to central London from his constituency to be personally briefed by Basu and the Met commissioner, Cressida Dick.

Labour leader Jeremy Corbyn tweeted: “Shocking reports from London Bridge. My thoughts are with those caught up in the incident. Thank you to the police and emergency services who are responding.”

One woman from New York, who gave her name only as Aditi, said she had hidden in the attic of a cheese shop in nearby Borough market when she noticed people running from the bridge.

“We ran down a side street and noticed people running into Neal’s Yard Dairy,” she told the Guardian. “We were one of the last to get in before they locked the door. We were taken to the attic and the staff said they had been trained for such an incident. We were there for around 30 minutes before the police gave clearance to exit and move further away from the market. My partner and I are rattled but okay. We’re just glad to be safe.”

Another woman called Jo from east London said she had been in the market when people started to panic and run. “I saw two people fall over. The police then told people to get inside, so we sheltered in Le Pain Quotidien. They locked the doors and moved people away from the glass. The police has just let us leave.”

More than 20 witnesses were taken to be debriefed at the police-allocated building near the incident. Some of them looked shaken as they entered the building.

More arrived in marked and unmarked police vehicles as the afternoon wore on, including restaurant and transport workers. None were willing to talk to reporters. – Guardian