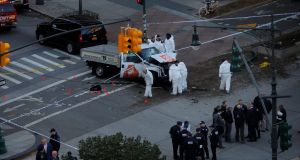 Police investigate a vehicle allegedly used in a ramming incident on the West Side Highway in Manhattan, New York, on Tuesday. Photograph: Andrew Kelly/Reuters

US president Donald Trump condemned a “sick and deranged person” who struck and killed people with a vehicle in Manhattan on Tuesday, though he stopped short of calling the incident a terrorist attack.

“In NYC, looks like another attack by a very sick and deranged person. Law enforcement is following this closely. NOT IN THE U.S.A.!,” Trump said in a post to Twitter in the afternoon.

The president was briefed on the incident earlier in the day by White House chief of staff John Kelly, and press secretary Sarah Sanders said he would be updated as more details became known. White House officials did not comment directly on the investigation.

“Our thoughts and prayers are with all those affected,” Sanders said in a statement. The president’s daughter and senior adviser, Ivanka Trump, tweeted that the news was “heartbreaking” and she was “praying for the victims”.

Currently there is one person in custody. No others outstanding. All information is preliminary as the investigation is ongoing. pic.twitter.com/nsaUgZ8MJH

The vehicle continued south striking another vehicle. The suspect exited the vehicle displaying imitation firearms & was shot by NYPD

In NYC, looks like another attack by a very sick and deranged person. Law enforcement is following this closely. NOT IN THE U.S.A.!

The New York Police Department said a vehicle entered a bike path just north of Chambers Street in the Tribeca neighbourhood and struck multiple people on the path. The vehicle then continued south and struck another vehicle.

“There are several fatalities and numerous people injured,” the NYPD said in a statement.

Police said the suspect was in custody. He was shot when he exited the vehicle while brandishing imitation firearms.

Mayor Bill de Blasio’s office said in a post to Twitter that he was travelling to the scene. Officials cautioned that their early information about the incident was preliminary and said more information was to follow.