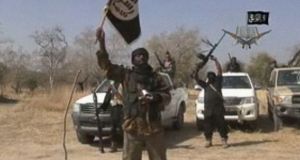 An attack by three suicide bombers has left at least 18 people dead and more than 20 others wounded at a fish market outside the sprawling Nigerian city that gave rise to the Islamist extremist group Boko Haram, officials and news reports have said.

The bombers detonated explosives on Friday at the market, about 15 miles from the centre of Maiduguri, according to Reuters. No one claimed responsibility for the attacks, but they were similar to scores of others in and around the city in the past few months.

The attackers were all female, according to the Associated Press, and the victims were mostly women and children, local news outlets reported. Boko Haram has been known to use young women and children as suicide bombers, in addition to sending men to attack mosques, markets and other places where crowds gather.

Police commissioner of Borno state Damian Chukwu said at least 22 were wounded in the attack. The war with Boko Haram, which has displaced millions, is entering its ninth year. Militants raging against decades of economic inequality and government corruption in the region want to create a state that adheres to a strident version of Islam. In their quest, they have burned villages, slaughtered men and boys who refuse to join their ranks, raped and enslaved women and girls, and strapped suicide bombs to terrified hostages.

The Nigerian military has made progress in the past weeks in chasing fighters from their forest hideouts. And this month the military secured the release of high-profile hostages – a group of women police officers and several university professors who had been held by the insurgents.

Negotiations for the release of about 100 young women kidnapped from a school in Chibok in 2014 are still under way. Dozens of other Chibok girls have been released after similar negotiations or after escaping. Thousands of other residents from villages overrun by Boko Haram are also believed to be held in miserable conditions by the militants, who are known to conscript children into their ranks.

Military and government officials have announced the defeat of Boko Haram several times, even as fighters have launched attacks and released propaganda videos taunting officials. Last week leader of Boko Haram Abubakar Shekau appeared in a 10-minute video clip in which he disputed the Nigerian military’s claims that Boko Haram militants had been defeated in the Sambisa forest of northeastern Nigeria.

In the footage he is wearing all black and holding a rifle, while two masked men stand alongside him. At one point, he looks into the camera and addresses the military saying, “If you have killed us, why are we still alive?” It is unclear when and where the footage was recorded.

1 Transmission of Covid-19 on flight into Ireland linked to 59 infections
2 Covid-19: Public urged to ‘stay at home’ as 1,025 further cases confirmed in State
3 Doctors are being asked to ‘play God’ in deciding who to give flu vaccine to – GP
4 President signs Bill on mother and baby home records into law
5 Couple found guilty of murdering Irish dancer with ‘devil’s breath’ drug
Real news has value SUBSCRIBE