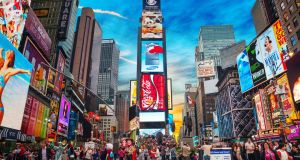 Three men have been arrested since May of last year on charges of plotting attacks in New York City for Islamic State in the summer of 2016, US prosecutors said on Friday.

The planned attacks, which were thwarted by law enforcement, included detonating explosives in Manhattan’s Times Square and in the city’s subway, according to the office of acting US attorney Joon Kim in Manhattan.

One of the men, 19-year-old Canadian citizen Abdulrahman El Bahnasawy, has been in US custody since May 2016, when he was arrested in New Jersey. He pleaded guilty to terrorism charges in October 2016, the prosecutors said.

Talha Haroon, a 19-year-old US citizen, was arrested in Pakistan, where he lives, around September 2016, and Russell Salic, a 37-year-old citizen of the Philippines, was arrested in that country in April of this year, according to Mr Kim’s office.

Prosecutors said they expected Mr Haroon and Mr Salic to be extradited to the United States to face the charges, which include conspiracy to commit acts of terrorism and to support a terrorist organization. If convicted of the most serious charges, they face a maximum sentence of life in prison.

Lawyers for the three men could not immediately be identified.

According to documents unsealed in federal court in Manhattan on Friday, Mr El Bahnasawy and Mr Haroon planned to carry out attacks during the Muslim holy month of Ramadan, which ran from early June to early July.

Mr Haroon likewise told the officer that Time Square was “a perfect spot to hit them,” prosecutors said.

Mr Salic, who maintained a pro-Islamic State social media presence, told the undercover officer that he had been communicating with Mr El Bahnasawy, and sent the officer about $423 (€360) from the Philippines to help pay for the attacks, according to prosecutors.

Mr El Bahnasawy bought bomb-making materials in Canada, and was arrested the same day he came to the United States, the prosecutors said.