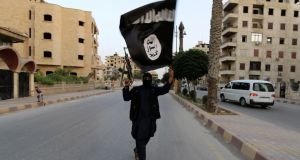 Loss of its base has transformed the war fought by Islamic State. Their overall narrative has collapsed and no longer appeals. Photograph: Reuters

The thousands of people streaming out of Baghouz, Islamic State’s last enclave in eastern Syria, tell a tale of imminent military defeat for the terror group and continuing problems in dealing with its surviving supporters.

Those fleeing are far more numerous than United States and other intelligence agencies have realised or revealed. They are mostly women and children and, so far, have swelled those held at a Kurdish-run refugee camp 320 miles away to a reported 43,000.

That number includes thousands of IS fighters and supporters, many of whom are posing significant challenges for their countries of origin as a result of their desire now to return home.

The expected capture of Baghouz by the US-backed Syrian Democratic Forces, a mainly Kurdish militia, will bring an end to the territorial base IS has used since its fighters seized the Iraqi towns of Falluja and Raqqa in 2014.

They went on from there to create a “state” the size of Britain with a population of 10 million straddling Iraq and Syria and sufficient resources to raise revenue, tax oil, conscript young men and force tens of thousands of women into sex slavery.

The base was used to mount an estimated 140 terror attacks in 29 states around the world. These successes inevitably attracted international retaliation, from the United States, Russia, Iran and Turkey as well as from the Iraqi and Syrian forces, all of which created this destabilising geopolitical cockpit.

Loss of its base has transformed the war fought by Islamic State. Their overall narrative has collapsed and no longer appeals. Nevertheless their ideology survives and their fighters will probably disperse across the region. So long as Sunni Muslims continue to be discriminated against, Saudi Arabian influence is reasserted and the Iraqi and Syrian states remain weak they are likely to retain some support.

The ad hoc international coalition that fought against IS now has to decide how to handle the fallout from this war, including whether to allow IS fighters return and provide relief for so many refugees.