A second victim has been named, a US citizen who reportedly moved to the UK 15 years ago 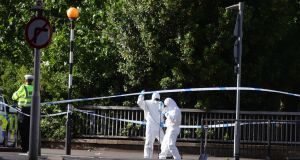 Forensic officers work near Forbury Gardens, in Reading town centre, the scene of a multiple stabbing attack which took place at around 7pm on Saturday leaving three people dead and another three seriously injured. Photograph: PA

A terror suspect held over the knife attack in a park in the southern English town of Reading that killed three people came to the attention of MI5 last year, security sources have said.

The 25-year-old man, understood to be named Khairi Saadallah, was detained a short distance from the scene at Forbury Gardens and arrested on suspicion of murder.

He was later re-arrested under Section 41 of the Terrorism Act, which gives British police the power to detain him without charge for up to 14 days.

A second victim of the Reading terror attack has been named locally as 39-year-old Joe Ritchie-Bennett, a US citizen who reportedly moved to the UK 15 years ago. Mr Ritchie-Bennett was friends with 36-year-old teacher James Furlong, the only other victim to have been named so far.

His Facebook page states he is originally from Philadelphia in Pennsylvania, and US ambassador to the UK Woody Johnson has confirmed an American citizen was killed in the attack in Forbury Gardens. Martin Cooper said he had known Mr Ritchie-Bennett for four years and Mr Furlong for at least two, having met them at the Blagrave Arms in Reading — a pub where they were regulars.

Mr Cooper, who is chief executive of LGBT+ charity Reading Pride, added that Mr Ritchie-Bennett and Mr Furlong were “great supporters” and members of the community.

It emerged on Sunday the suspect, a refugee of the civil war in Libya, briefly came to the attention of MI5 last year, but the information provided did not meet the threshold of investigation.

British media are reporting that M15 had received intelligence he planned to travel abroad, possibly for terrorism purposes, but the threat was found to be insubstantial. As counter-terror officers investigate, mental health is understood to be considered a major factor in the latest incident.

Police have said they are not looking for anyone else in connection with the attack.

British prime Minister Boris Johnson said he was “appalled and sickened” by the incident and said “we will not hesitate to take action” if there are lessons to be learned from the circumstances.

The suspect was jailed in October for a complex series of non-terror offences before his sentence was reduced to one of 17 months and 20 days’ imprisonment in the Court of Appeal.

One of the appeal judges who gave the judgment in March, Mr Justice Goss, noted Saadallah’s various mental health issues in reducing the sentence.

Saadallah was jailed for 25 months and 20 days in October for various non-terror-related offences dating back to November 2018. The offences included racially aggravated common assault — after he called a police officer a “slave” and spat in her face — carrying a bladed article and assaulting an emergency worker. A month earlier in September 2019 he was jailed for 10 weeks after he admitted spitting at District Judge Sophie Toms as she sentenced him at Reading Magistrates’ Court in March for two previous convictions.

Court documents showed he had a history of debt and homelessness, and previously suffered from post-traumatic stress disorder, depression and a personality disorder.

Saadallah was released from prison earlier this month, it is understood, and the Covid-19 pandemic played no part in the decision to free him. The Sun reported that he left HMP Bullingdon, Oxfordshire, 17 days ago after less than half of his sentence.

Tributes from former students of Mr Furlong poured in after a letter from the two co-head teachers at his school — the Holt School in Wokingham — announcing his death was circulated online.

His parents, Gary and Janet, said in a statement: “He was the best son, brother, uncle and partner you could wish for.

“We are thankful for the memories he gave us all. We will never forget him and he will live in our hearts forever.”

Security guard Sydney McDonald, 65, who saw the suspect being rugby-tackled to the ground by police described how it looked as if he had put his hands “in a big bucket of red paint”.

He explained: “I had just finished work at about 7.10pm and as soon as I came out of the shop, there were about four police cars, they turned around in the middle of the road, they were driving pretty fast.

“There was a guy and I saw him pointing to a man and saying ‘There he is, there he is’. If he hadn’t, they would have missed him. He was running really fast, properly fast. They put the emergency brakes on, jumped out of the car and rugby-tackled him to the floor. He was on his stomach and the blood on his hands looked like he had put his hand in a big bucket of red paint.

“They put the handcuffs on, he wasn’t putting up a fight or anything like that, they picked him up and put him in the van, he just sat there all quiet, he wasn’t saying nothing.”

Personal trainer Lawrence Wort, 20, who said he was around 10 metres from the incident, said on Saturday night the suspect was alone and “shouted some unintelligible words” before launching the attack.

Thames Valley Police have pleaded with the public not to share any pictures or images of the killings on social media, and instead contact them.

Despite treating the incident as a terror attack, Metropolitan Police Assistant Commissioner Neil Basu said on Sunday the motive is still “far from certain”.

Mr Basu said there was no evidence to suggest anyone attending crowded places is at risk, but asked people to “be alert, not alarmed, when you are in public”.

The attack took place after a Black Lives Matter rally by anti-racism protesters in the park, which concluded three hours earlier. Mr Basu said the protest and later attack were not related.

Coronavirus restrictions mean venues such as pubs are closed, so many people in Britain have been gathering in parks in the evenings to meet friends.

The nature of the attack was reminiscent of a number of recent incidents in Britain that authorities considered to be terrorism.

Britain also suffered four attacks in 2017, the most deadly of which – a suicide bombing at the end of a concert by US singer Ariana Grande in Manchester, northern England – was carried out by a Briton born to Libyan parents.

In April, the officer in charge of the police’s anti-radicalisation programme said social isolation during the coronavirus lockdown could make people more susceptible to being exploited by extremists.

Rescuers rush to save hundreds of stranded pilot whales in Australia 08:44
Trump to name US supreme court justice successor by Saturday 06:47
Trump sanctions against Iran to be followed by warning at UN 01:00
Bars and restaurants in England to close at 10pm under new restrictions 22:36
Karen Bradley says she regrets the ‘hurt’ she caused while NI secretary 21:43

1 Further restrictions to be considered in Dublin and elsewhere as Covid-19 cases rise
2 Dublin farmer discovers overnight rave on his land
3 Coronavirus: Almost half of Irish people believe the worst ‘is ahead of us’
4 Screen time linked to rising mental health issues in children – study
5 Coronavirus: Council tenants who have parties ‘risk eviction’
Real news has value SUBSCRIBE