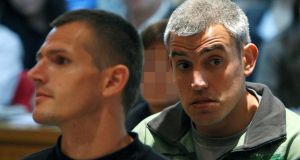 The court ruled that convicted Eta terrorists Igor Portu (left) and Mattin Sarasola had suffered “degrading and inhumane” treatment by Spanish security forces after their detention in 2008. Photograph: Reuters

The Spanish state has been ordered to pay two convicted Eta terrorists who carried out a notorious bombing attack on Madrid airport €50,000 in compensation for their mistreatment at the hands of the police.

The European Court of Human Rights (ECHR) found on Tuesday that Mattin Sarasola and Igor Portu had suffered “degrading and inhumane” treatment by Spanish security forces after their detention in 2008.

The two men were arrested in connection with the bombing of the car park at Madrid airport’s Terminal 4, which killed two people in December 2006 and brought to an end a tentative peace process instigated by Socialist prime minister José Luis Rodríguez Zapatero. They are currently serving jail sentences for carrying out the attack.

In 2010, a Basque court ruled that four members of the Civil Guard’s anti-terrorist unit had tortured the two men after their arrest in Mondragón, in northern Spain. The pair had alleged that after their arrest, instead of being taken straight to a police station, the civil guards had taken them to a secluded rural area where they were beaten.

However, in 2011 the supreme court reversed the ruling, deciding that no mistreatment had taken place. It highlighted what it said was the habit of Eta members of making false torture complaints when arrested.

In response, Portu and Sarasola took their case before Spain’s constitutional court, which rejected it, prompting them to appeal to the Strasbourg-based ECHR.

The ECHR found that “the civil guards were motivated by a desire to punish, vanquish or intimidate the plaintiffs because of their presumed membership of Eta”.

However, although the ECHR ruling has ordered the compensation for mistreatment, it does not deem it a case of torture, which it says cannot be proven in this case. Three out of the seven magistrates who ruled disagreed, stating that it was “almost indisputable” that there was torture.

The tribunal also reprimanded the Spanish judiciary for failing to investigate the case thoroughly.

Spain’s AVT terrorism victims’ association described the court’s decision as “incomprehensible”, adding that “clearly something is not being done right in Strasbourg”.

Josu Erkoreka, spokesman for the nationalist Basque regional government, welcomed the ruling, and called on the Spanish government to take measures to ensure that “in the future this type of situation never happens again”.

Eta killed ¨more than 800 people during a four-decade terrorist campaign. It has not killed since 2010 and officially disarmed last year.

The torture issue has long been a bone of contention between Spain and the ECHR, which has previously condemned the country seven times for failing to investigate similar allegations. However, this is the first time a case has been through every level of the Spanish judiciary before reaching Strasbourg.

1 Sinn Féin seeks to draw line under TD’s ‘unacceptable’ tweets
2 UK to close borders to non-English speakers and unskilled workers
3 Draining the swamp? Trump in spree of clemency for rich white men
4 A Russian cruiser with ‘cannibal rats’: What other ‘ghost ships’ could be out there?
5 New Sinn Féin TD apologises for ‘glib, off-the-cuff tweets’
Real news has value SUBSCRIBE