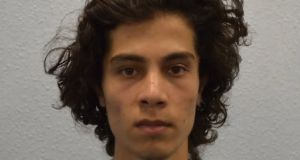 Ahmed Hassan (18), of Sunbury, Surrey, planted a home-made bomb on a London tube and has been found guilty of attempted murder. File photograph: EPA 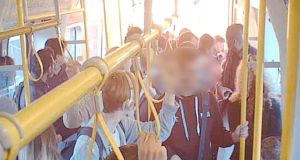 A teenage Iraqi asylum seeker who planted a bomb on a crowded London underground train had been subjected to the government’s Prevent deradicalisation programme for more than a year, it emerged at the end of his Old Bailey trial on Friday.

Ahmed Hassan was found guilty of attempted murder after his home-made device partially detonated at Parsons Green in west London during the morning rush hour in September 2017.

Hassan stared at the ground as the jury returned its verdict after less than a day of deliberations. The judge, Mr Justice Haddon-Cave, said he was convicted on “overwhelming evidence”. He will be sentenced next week.

Thirty people were injured in Hassan’s attack. The explosion sent a fireball through the tube carriage and burned passengers’ skin, hair and clothing.

Survivors spoke of feeling their faces being both burned and lacerated by flying glass.

Hassan (18), who had been living with foster parents in Sunbury-on-Thames, Surrey, admitted making the bomb by mixing a powerful but unstable explosive using hydrogen peroxide. He also made an initiator using a kitchen timer.

He told the London court that he had made the device because he was “very bored, very depressed, very confused” and wanted to draw attention to himself.

The disclosure that Hassan had been referred to the Prevent programme will heighten concerns over the effectiveness of the government scheme, which aims to stop young Muslims from being radicalised.

The security minister, Ben Wallace, acknowledged that there were “lessons to be learned” from the case, while Surrey County Council issued an apology after the verdict was returned. The Surrey police and crime commissioner also said there were “opportunities missed” to thwart the attack. David Munro told the BBC: “It is obvious we were too slow.”

A review of Surrey’s Prevent scheme has been commissioned.

Hassan had denied attempted murder and also denied an alternative charge of causing an explosion, maintaining that he had mixed the explosive in a way that would ensure the device burned rather than exploded – a claim the jury unanimously rejected.

The court heard both Hassan’s parents were dead by the time he was six, and that he blamed Britain for his father’s death in an airstrike on Baghdad. He was also upset by the ongoing airstrikes against his country, sending a text message to one of his lecturers: “Your country continues to bomb my people daily.”

Alison Morgan, prosecuting, told the jury that Hassan had been motivated by “anger and hatred” against Britain.

The London court heard Hassan had told Home Office immigration officials that he had been abducted by Islamic State in Iraq and had spent three months “being trained how to kill”.

Hassan later said he had fabricated this account in an attempt to win sympathy. He said he did not want to admit that since his father’s death he and his elder brother had been raised by an uncle in a relatively safe and prosperous town north of Baghdad.

Nevertheless, he was referred to the Prevent programme in Surrey, and then subjected to the Channel counter-radicalisation initiative, which was intended to draw him away from terrorist impulses.

After the verdict, Cmdr Dean Haydon, head of Scotland Yard’s counter-terrorism command, said that Hassan – a “devious and cunning” young man – had given every impression that he was engaging positively with the deradicalisation initiatives.

“It’s only good fortune that it did [only] partially detonate,” he said. “If it had detonated properly it would have killed many people on that Tube and seriously injured many others.” – Guardian service