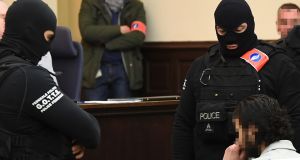 Salah Abdeslam was taken from his cell in Fleury-Mérogis prison, south of Paris, before 4am on Monday, to be transported by road to the Palais de Justice in Brussels for his four-day trial over the gunfight that led to his arrest.

Abdeslam is the only survivor of 10 jihadists who killed 130 people and wounded 683 others in attacks in Paris and Saint-Denis on the night of November 13th, 2015. He will be tried later in Paris for his role in those atrocities, which were organised by the Islamic State terror group.

Luc Hennart, the Belgian judge, noted before the trial opened on Monday morning: “We will not talk about the Paris and Brussels attacks.” Victims of the Paris attacks, and of the March 22nd, 2016 attacks that killed 32 people and wounded 340 others in Brussels, are nonetheless attending the trial, along with 400 journalists.

Abdeslam is charged with “attempted murder in a terrorist context and illegal possession of weapons”. His Tunisian co-defendant, Sofiane Ayari (24), faces the same charges. Prosecutor Kathleen Grosjean called for 20-year prison sentences for both men, for their part in the shoot-out in Forest, a town on the outskirts of Brussels, on March 15th, 2016.

Abdeslam (28) is a French citizen of Moroccan origin who grew up in the immigrant neighbourhood of Molenbeek in Brussels. He ran a bar with his brother, and had a reputation for partying and womanising. His Belgian lawyer, Sven Mary, has called him “a little creep from Molenbeek” who “has the intelligence of an empty ashtray”.

Two policemen and a policewoman were wounded in the shootout. Abdeslam and Ayari would be arrested in Abdeslam’s cousin’s cellar in Molenbeek three days later. The shootout in Forest and Abdeslam’s arrest are believed to have precipitated the metro and airport attacks in Brussels.

France and Belgium have taken dramatic measures for the trial. A wing of the maximum security prison at Vendin-le-Vieil, across the border in France and 150km from Brussels, has been requisitioned for Abdeslam for four nights. Commandos from the French GIGN anti-terrorist group will escort him to and from the courthouse in Brussels, which is surrounded by large cement barriers and 300 policemen.

The apartment in Forest where the shoot-out took place had been rented under the name Mehdi Vandenbus by Khalid El Bakraoui, who would become the suicide bomber in the Brussels metro.

Jihadists who had not been identified by police did grocery shopping. Abdeslam spent his days sleeping and playing video games with Mohamed Abrini, the “man with the hat” in videos of the Zaventem Airport bombing. Abrini is in custody in Belgium.

Osama Krayem, who also stayed in the hideout, told police that Abdeslam was a good cook. Belgian anti-terrorist police turned up at the apartment on March 15th, 2016, expecting to find it empty. Mohamed Belkaid (35), an Algerian, sprayed them with Kalashnikov fire.

Belkaid and Ayari, the two men who were in the apartment with Abdeslam, “had no links to Belgium. They were picked up by Abdeslam in Germany to come and sow terror,” the prosecutor said on Monday.

Belkaid held police off for four hours before he was shot dead. Abdeslam and Ayari escaped through back gardens. Abdeslam has remained silent since he was transferred from Belgium to France in April 2016. He has been kept in solitary confinement, in part to prevent him influencing other prisoners.

His former lawyer, Frank Berton, said prison was “turning Salah Abdeslam into a wild beast” and implied he would talk in exchange for better conditions. “My silence does not make me guilty. Do what you will with me. I place my confidence in my Lord,” Abdeslam said in court on Monday morning.

When he was arrested in March 2016, Abdeslam told Belgian police that he was supposed to have blown himself up at the France-Germany football match at the Stade de France, on the night of the Paris attacks, but changed his mind.

That version is contradicted by a letter found in a computer that the airport bombers dumped in a wastebin in the Schaerbeek neighbourhood of Brussels. “Although I would have wanted to be among the martyrs, Allah decided otherwise, and I managed to rejoin the other brothers because there was a defect in my belt,” Abdeslam wrote.

Forensic experts found a damaged cable in the front of the vest, and a broken part in its detonator. In his written testament, Abdeslam also said he thought about fleeing to Syria, “but on reflection I thought the best thing was to finish the job here with the brothers. Only I’d like to be better equipped in the future before I go into action.”

This week’s trial may be cut short if Abdeslam maintains his silence. The verdict is expected in April.