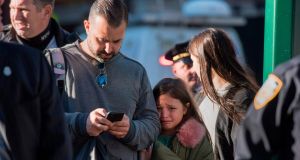 Am upset young girl looks on as police officers block an area following a terror incident in Manhattan, New York in which eight people were killed. Photograph: Don Emmert/AFP/Getty Images.

Five friends from Argentina celebrating the 30th anniversary of their high school graduation were among those killed in the New York terrorist attack on Tuesday.

Argentina’s foreign ministry confirmed the identities of the victims, all from the city of Rosario in central Argentina.

The men were celebrating the 30th anniversary of their graduation from school when they were caught up in the deadly terror attack that has claimed the lives of at least eight people.

The statement said the five deaths were “a result of the dramatic terrorist attack in New York this afternoon”.

It continued: “A sixth victim, Martin Ludovico Marro, is hospitalised at the Presbyterian Hospital of Manhattan recovering from injuries suffered, out of danger according to the official medical part.

“The compatriots, from the city of Rosario, were part of a group of friendscelebrating the 30th anniversary of their graduation from the polytechnicschool of that city when the tragic event occurred.

“The consulate general continues working in permanent contact with the police authorities and the hospital that received the affected, as well as with therelatives in Argentina. We accompany the families in this terrible moment of deep pain, which all Argentines share.”

Argentina’s president Mauricio Macri later tweeted: “Profoundly moved by the tragic deaths this afternoon in NY. We place ourselves at the disposition of the families of the Argentinian victims.”

Local media reported that Mr Erlij, a 48-year-old businessman, owned a steel mill and paid the fares of some of his schoolmates in order for them to be able to make the trip to the US with him.

Meanwhile, the Belgian government confirmed one of its citizens was killed in the truck attack.

Belgium’s deputy prime minister and foreign affairs minister Didier Reynders said a Belgian was among those who lost their lives when a truck ploughed into cyclists and pedestrians in Manhattan.

On Twitter, Mr Reynders said he was “deeply saddened” by the news of the death of a Belgian citizen. He said three other Belgians were “also wounded” in the attack, and were “in the operating room”.