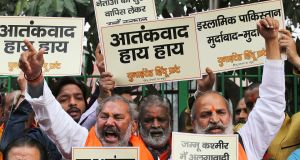 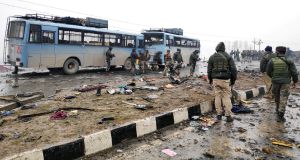 India’s prime minister has warned Pakistan it will pay a “heavy price” for a suicide bombing in Kashmir that killed at least 40 paramilitaries on Thursday, the deadliest attack in a 30-year guerrilla war in the region.

Narendra Modi said the “blood of the people is boiling” after a car laden with explosives was detonated beside a convoy carrying 2,500 Indian security personnel on a major highway between the Kashmir and Jammu regions.

No official death toll has been announced but two senior police sources in Kashmir have said at least 40 security personnel died in the blast.

The bombing was claimed by the Pakistan-based militant group Jaish-e-Mohammed and immediately sparked calls for retribution against Islamabad from across Indian politics and media.

“Our neighbouring country, which has been isolated internationally, thinks such terror attacks can destabilise use, but their plans will not materialise,” Mr Modi said, telling an audience in Delhi that security forces had been given “complete freedom” to respond.

India’s finance minister, Arun Jaitley, said there was incontrovertible evidence that Pakistan had “a direct hand in this gruesome terrorist incident” and that all diplomatic measures would be taken to isolate the country.

He said Pakistan’s most favoured nation status, a guarantee of equal treatment in trade negotiations, had been revoked – a largely symbolic gesture given the relatively small $2 billion (€1.8 billion) bilateral trade relationship between the countries.

The White House urged Pakistan in a statement “to end immediately the support and safe haven provided to all terrorist groups operating on its soil”.

Pakistan’s foreign ministry said it rejected “any insinuation” that it was linked to the attack.

Jaish-e-Mohammed, whose leader Masood Azhar lives freely in Pakistan, was founded in 2000 and has been implicated in several major attacks in India including the bombing of the country’s parliament in 2001. There was a lull in its activity after the September 11 th, 2001, attacks when the Pakistani government cracked down on the group.

But it has re-emerged in recent years, carrying out attacks in India including on a Punjab state airbase in January 2016, and nine months later, on an army base in Uri near the ceasefire line with Pakistan.

The Uri attack killed 19 and prompted the Indian government to announce it had carried out “surgical strikes” to destroy militant camps inside Pakistan-controlled Kashmir – a measured response that salved public anger without igniting a wider conflict.

Control of the Himalayan region, one of the most militarised places on earth, is divided between India and Pakistan and claimed in full by both. China administers a smaller patch in the east.

A full-blown revolt against Indian control of Kashmir bolstered by Pakistani and Afghani fighters raged throughout the 1990s but waned after negotiations between Delhi and Islamabad.

It has been replaced by a low-level insurgency waged largely by young Kashmiris disillusioned with India’s failure to accommodate popular calls for greater autonomy or independence for the region.

Thursday’s attacker was identified as Adil Ahmad Dar (20), a mason who joined the militancy in March year. In a video released after the attack, Dar said he was avenging human rights violations and warned that more killing would follow.

Both the ruling Bharatiya Janata party and the main opposition Congress cancelled all political events on Friday. Indians will vote in general elections starting in April, increasing the pressure on Modi to find a carefully calibrated response. – Guardian