At least four injured in what officers believe is an attack on foreigners, according to police 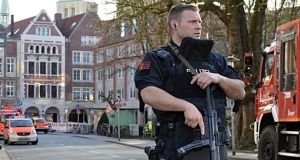 Police said those hit by the car included Syrian and Afghan citizens, and some were seriously injured. File photograph: AP

At least four people were injured when a man intentionally drove into a crowd of people in western Germany in what appears to have been an attack directed at foreigners, police have said.

Muenster police said the 50-year-old driver of a Mercedes rammed into a crowd in the centre of Bottrop minutes into the new year.

Two further attempts by the driver to run down other people failed.

On the Berliner Platz he drove again into a group of people. At least four, including Syrian and Afghan nationals, were severely injured. Police confirmed that those struck by the car were in a serious condition.

The driver fled towards the nearby city of Essen before being stopped and arrested by police.

The suspect had also tried in Essen to drive his car into a group of people waiting at a bus stop on the Schlossstrasse.

At his arrest the driver made xenophobic remarks, according to police. The investigative authorities are assuming a targeted attack at this point which may be a consequence of the driver’s xenophobic attitude. Moreover, investigating officers said there are indications the suspect is mentally ill and that the attack is presumed to have been premeditated.