Frenchman jailed for life for first Isis attack in Europe 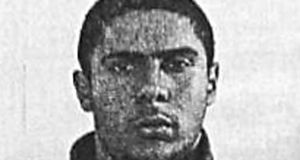 Mehdi Nemmouche: the quadruple murder was the first in a wave of terrorist attacks carried out by Isis in Europe. Photograph: STR/AFP/Getty Images

Mehdi Nemmouche, the Frenchman who murdered four people at the Jewish museum in Brussels on May 24th, 2014, will serve a life sentence in France, a 12-person jury decided in the early hours of Tuesday.

Under the Belgian justice system, Nemmouche was pronounced guilty on March 7th, but sentenced on Tuesday.

The families of Nemmouche’s victims expressed relief at the conclusion of the nine-week trial, during which Nemmouche refused to comment on his motivation or contacts with Islamic State. The quadruple murder was the first in a wave of terrorist attacks carried out by the group in Europe.

The decision was “just and proportionate”, said the lawyer representing the family of Miriam and Emmanuel Riva. The Israeli couple, aged 53 and 54, were the first to be shot dead by Nemmouche.

Michèle Hirsch, a lawyer for civil plaintiffs, said the testimony of Didier François and Nicolas Hénin, French journalists who were held hostage by Nemmouche in Syria, was crucial because it proved the killer belonged to “the same pack” which committed atrocities in Paris and Brussels in 2015-2016.

Belgian authorities initially claimed Nemmouche was a “lone wolf” who acted without accomplices. Subsequent attacks were claimed by Islamic State, which is also known as Isis. Nemmouche will stand trial a second time in Paris for the kidnapping of four French journalists between June 2013 and April 2014.

The jury followed the instructions of prosecutor Yves Moreau in handing down a life sentence. Mr Moreau said it would be “indecent” to contemplate extenuating circumstances. He described Nemmouche as a “psychopath” who “if he gets out of prison he will start killing again”.

Addressing Nemmouche directly, Mr Moreau said, “You are a coward. You kill people from behind. You kill elderly women with weapons of war. You kill because you like it.” Dominique Sabrier, Nemmouche’s third victim, was a 66-year-old French volunteer working at the museum. He also shot dead Alexandre Strens, the museum’s 26-year-old receptionist.

Nemmouche claimed he was framed. But he was caught in Marseille bus station six days later, carrying the murder weapons in a sports bag. Investigators found videos in which he claimed responsibility.

According to the conspiracy theory hatched by Nemmouche’s lawyer, Sébastien Courtoy, Lebanese and Iranian intelligence services targeted the Rivas because they allegedly worked for the Israeli intelligence agency Mossad.

Mr Courtoy offered no evidence to support his theory. He said the life sentence was “predictable” because Nemmouche refused to engage in “a big exhibitionist outpouring about his assassinated childhood to touch the jurors”.

Nemmouche (33) was born in Roubaix, northeastern France. The identity of his father is unknown. His mother abandoned him at the age of three months and he was reportedly abused by a foster family. He refused to talk about his childhood during the trial, and forbade relatives from testifying.

Mr Courtoy said life imprisonment would be “a slow death sentence” which would “push this man into madness”. The jury had been “particularly humane in a trial that reeked of hatred”, he added.

Nemmouche’s only words at the end of his trial, spoken with a sarcastic smile, were “life goes on”. Adrien Masset, the lawyer for the Jewish Museum, said he was not surprised by Nemmouche’s “contempt for his victims”.

The jury deliberated for eight hours, and cited Nemmouche’s “total absence of regret”, unwillingness to explain himself and the fact that “he did not hesitate to sully the memory of his victims for the sake of his story about having been framed” as factors in their decision.

Nacer Bendrer, the petty criminal from Marseille who furnished the murder weapons, was sentenced to 15 years in prison.