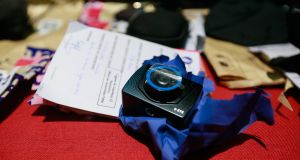 Pieces of evidence are displayed during the trial regarding the terrorist attack at the Jewish museum in Brussels, at the Brussels Justice Palace, this week. Photograph: Stephanie Lecocq/EPA

Mehdi Nemmouche is on trial in Brussels until early March, accused of murdering an Israeli couple, a French volunteer and a receptionist at the Jewish museum in Brussels in May 2014.

The testimony of four French journalists, who say they recognise Nemmouche as the man who guarded and tortured them during their detention in Syria from June 2013 until April 2014, was expected to be a key moment in the trial.

Two journalists preferred not to relive the ordeal, but on Thursday, Didier François and Nicolas Hénin spent 3½ hours telling the jury in the high court about the 33-year-old Franco-Algerian who is alleged to have carried out the first atrocity in Europe by Islamic State, also known as Isis.

“I would describe him as sadistic, playful and narcissistic,” Hénin said. “He played with us, as if he were creating a role for himself in the theatre. He made little jokes. For example, he said September 11th should be a holiday, and he refused to give us food that day.”

When Nemmouche’s trial opened on January 10th, François told Europe 1 radio station, which employs him, “I will never forget how violent he could be . . . He really enjoyed crushing our fingernails with steel pincers. He liked giving us electric shocks with a stun gun when we went to the toilet. He would hit us 40 times on the same place on the head ...”

Because of their value as bargaining chips, the French hostages were treated better than Islamic State’s Iraqi and Syrian hostages. One of Nemmouche’s “games”, François recounted, was “torturing people in front of the door of our cell. When they took us to the toilet in the morning, sometimes we had to step over corpses who’d had their throats cut. We had to walk in their blood.”

Through his lawyers, Nemmouche is pleading not guilty. He “derives a devious pleasure from refusing to speak at the trial”, Hénin said in a telephone interview. In court on Thursday, Nemmouche “betrayed himself with a smile, when Didier told how he nicknamed him ‘my little Didier’. Nemmouche couldn’t help laughing. ‘Look how he’s smiling. He remembers,’ I said immediately. The whole courtroom saw he was smiling. Nemmouche’s face froze. He became ice cold. I have rarely seen a look of hatred like the one he shot me.”

Hénin spoke repeatedly of Nemmouche’s “playful” side. “He used to arrive at 2am in our cell with a scimitar, an Arab sabre, that he had probably looted from an antique shop. He said, ‘Look what we use to cut the throats of infidels. I’m going to cut your head off. On your knees!’ He told his buddy: ‘Take out your telephone. Film this. We’re going to put it on YouTube.’”

Hénin described the room where he was tortured by Nemmouche and Isis “soldiers”. “It was 10 metres by 10 metres. Chains, tubs,whips, metal bars, a hook on the ceiling, tyres.” The torture was carried out by “five masked men, all speaking French”.

In court, Hénin said later, “I went into a level of detail and description of the torture I had undergone which I had never revealed before in public. I had talked to almost no one about it. Even my parents learned things. I expected it to be painful, but it did me so much good to contribute to revealing the truth that I felt more relief than pain.”

Nemmouche is represented by Sebastien Courtoy and Henri Laquay, who are also lawyers for Dieudonné, the French comedian who has been accused repeatedly of anti-Semitism. The lawyers tried to prevent the journalists from testifying, on the grounds that the prosecution was creating a “trial within the trial”. Nemmouche will face a second trial in France for kidnapping and torture.

The defence lawyers claimed the journalists held in Syria were “not credible” because “Islamic State’s hostages were decapitated, and they’re still alive”.

The defence lawyers also claim the Israeli intelligence service Mossad carried out the murders at the Jewish museum, a theory propagated by the far right on social media.

“We were in court to talk about Nemmouche’s anti-Semitism,” Hénin said. Nemmouche had described Mohamed Merah, the Franco-Algerian who murdered seven people in 2012, including three Jewish children, as “the greatest Frenchman of all time”.

“One of his favourite lines was, ‘Hey, I feel good this morning. I’d like to get my Kalashnikov and smoke a little Jewish girl.”

A lawyer for the civil plaintiffs asked Hénin what was meant by “smoke”, in case jurors didn’t understand. “Killing with a firearm,” Hénin replied.

Nemmouche also admired Youssof Fofana, the leader of the “gang of Barbarians” who tortured a Jewish youth to death in a suburb of Paris. Fofana “only smoked one Jew”, Hénin said he told the journalists.