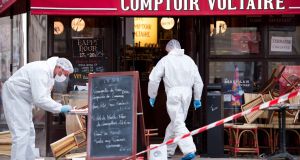 Forensic police on the scene of one the Paris attacks shootings: Police identified the ringleader as Abdelhamid Abaaoud, a 27-year-old Belgian citizen. Photograph: Marius Becker/EPA 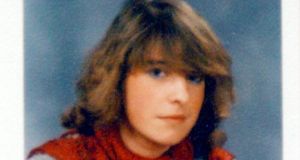 Yesterday’s attacks at Brussels airport and one of the city’s central metro stations, which has reportedly left at least 26 people dead, are the most deadly episode to date in Belgium’s troubled history of jihadism.

In recent years, counterterrorism officials across the EU have become increasingly nervous about the number of Belgian nationals who have gone to fight in Iraq and Syria, as well as the ease with which firearms can be bought in the country.

Some critics highlight what they say is the country’s poor record on integrating Muslim communities – the rundown district of Molenbeek, which has dispatched dozens of foreign fighters to the Middle East, has an unemployment rate of 30 per cent, treble the national average.

The country’s small size and fragmented system of governance make it an ideal spot for arms-smuggling, according to security experts. Whatever the cause, Belgium’s experiences of jihadism go back more than a decade.

2010 The Islamist group Sharia4Belgium is set up, initially to promote Islamic law in the country. It eventually recruits dozens of young Muslims to fight for Isis in Syria. On a per capita basis Belgium has more foreign fighters in Syria than any other EU state.

May 2014 An attack on a Jewish museum in Brussels on the eve of federal, regional and European parliamentary elections leaves three people dead and one badly injured.

June 2014 Mehdi Nemmouche, a 29-year old French citizen who spent time in Syria, is charged with the Brussels museum attack. He is believed to have bought his weapons in Brussels’ Molenbeek district.

January 9th, 2015 Two days after terrorists kill 12 people in an attack on the satirical French magazine Charlie Hebdo, Amedy Coulibaly, a French national, kills four hostages in a kosher supermarket in Paris. He later fatally shoots a police officer. He is also believed to have bought his weapons in Molenbeek.

Seven attackers die, but Salah Abdeslam, one of three brothers involved in the assault, returns to Belgium even though police check his car at the border with France. Abaaoud also remains at large.

1 Coronavirus: Cabinet to assess ‘stay at home’ measures as 50,000 deaths expected worldwide
2 ‘Everyone still thinks it’s a joke’ - parents of toddler with coronavirus speak out
3 ‘It’s Sinn Féin against the rest’: NI Executive in conflict over coronavirus
4 Coronavirus: Should everybody be wearing masks to combat Covid-19?
5 Coronavirus in Ireland: New powers of arrest for gardaí expected to come into force
Real news has value SUBSCRIBE