Terror has become a part of daily life in Europe 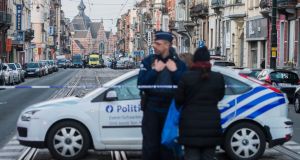 Belgian police during a search in Shaerbeek in Brussels, Belgium. Photograph: Stephanie Lecocq/EPA

The targets change, the tactics evolve. But the aftermath unfolds with the stomach- churning familiarity of a recurrent nightmare.

So it was with the images from the Belgian capital: terrified urban commuters fleeing plumes of smoke, ambulances and military personnel carriers speeding along deserted streets, an entire city shuddering chaotically to a standstill.

As the death toll continued to rise and Belgian police scrambled to identify the attackers, Europeans were having to confront what that sense of familiarity implies: that the threat of large-scale, indiscriminate atrocities, one that has long stalked parts of the Middle East and north Africa, may have become a fairly regular feature of life in the continent’s major cities.

In these four cities in the past four months alone, terrorists have detonated bombs or opened fire in public spaces whose appeal lies in their potential for the largest possible casualty numbers.

In the previous two years, jihadists had chosen specific targets in western Europe: a Jewish museum in Brussels in May 2014, the offices of Charlie Hebdo and a Jewish supermarket in Paris in January 2015, or the Great Synagogue and a blasphemy art exhibition in Copenhagen a month later.

The simultaneous attacks in Paris last November suggested a tactical shift. The carnage in Brussels confirms it.

And the more Islamic State is pegged back in Syria and Iraq, the more devastatingly it lashes out elsewhere.

All of this raises searching questions for security services and for political leaders. As investigators comb the crime scenes for evidence, the intelligence services are no doubt realising that the home-grown jihadist networks in Belgium, which by some estimates has the highest per capita number of Isis terrorists in Syria of any European country, are more extensive and sophisticated than they believed.

The attacks suggest the involvement of a large cell that had the ability to communicate, co-ordinate and carry out a huge operation undetected at a time when the terror alert was at its second-highest level and police were ramming the doors of suspected safe houses across Brussels.

Yet important as the security response will be, this is at its roots a challenge of political leadership.

Framing what Europe faces as a war, as some European leaders did within hours of the attacks, may help convince citizens to sacrifice more of their freedom for security and to accept the strictures that come with a near-constant state of emergency, but it also lends weight to the apocalyptic jihadist message.

Without an end to the conflict in Syria, the flow of radicalised, battle-hardened young Europeans willing to inflict mass casualties at home will continue.

It’s about better co-operation, particularly between national security services whose jealous guarding of their own patches inhibits the development of badly needed pan-European co-ordination.

The problem, as the euro zone crisis and the handling of refugees and migrants in the past year have shown, is that a European response can be a long time coming.