Lawyer says 26-year-old, linked to Brussels and Paris attacks, wants to ‘explain himself’ 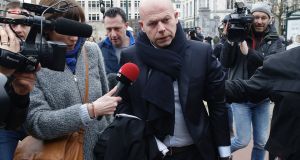 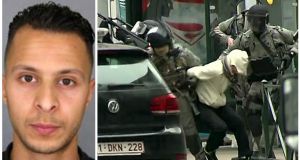 The chief suspect in the Paris attacks Salah Abdeslam (left) is seeking to be extradited to France. He was arrested during a raid on an apartment in Brussels on Friday (right) during which a number of people were detained.

Salah Abdeslam, who was captured on Friday and charged with terrorist murder over the Paris attacks in November, wants to be extradited to France as quickly as possible, his lawyer said on Thursday.

Sven Mary made the comments on Thursday after a court hearing in Brussels. The decision by Abdeslam (26) to accept extradition was a reversal of his position. He was Europe’s most wanted man until he was arrested on Friday in a raid in Molenbeek, the Brussels neighborhood where he grew up.

He appears to be a crucial link between the Paris attacks and those that struck Brussels on Tuesday, killing at least 31 people and wounding about 300 others. Both series of assaults were carried out by militants of the Islamic State.

After Abdeslam’s arrest, Mr Mary had said his client intended to resist extradition to France. Asked why Abdeslam had changed his mind, Mr Mary said his client understood that “the case here is just a small piece,” and that he wanted to “explain himself in France.”

Abdeslam has not spoken to investigators since the bombings in Brussels. Asked what his client had said about the attacks, Mr Mary replied; “He didn’t say, because he didn’t know it.”

Asked if Abdeslam had reacted to the attacks, Mr Mary responded; “He had no reaction.”

Mr Mary had earlier told Europe 1 radio, “Investigators went to see him yesterday, and he wants to see me first.” He added that he was not encouraging his client to remain silent. “I wouldn’t want him to clam up,” Mr Mary added. “His clamming up would make us face other Zaventems and other Bataclans,” he said, referring to the Belgian airport that was bombed and to the Paris concert hall where 90 people were killed by gunmen on November 13th last.

Abdeslam and two others - Abid Aberkan, a relative who is accused of having sheltered him; and a man who is suspected of being an accomplice and whose identity is unclear - appeared in a Brussels court Thursday morning, but the hearing was postponed to April 7th at the request of their lawyers.

The man who is suspected of being an accomplice has used various aliases, including Amine Choukri, Monir Ahmed Alaaj and Soufien Ayari. He was arrested with Abdeslam last Friday in Molenbeek.

Abdeslam’s arrest appeared to have set off an anxious response by his associate Ibrahim el-Bakraoui (29), one of three suicide bombers who carried out the Brussels attacks. In a statement found on a computer that was discarded in a trash can, Bakraoui wrote that he was wanted, felt unsafe, did not know what to do and feared that if he dallied, he risked ending up “next to him in a cell,” the Belgian federal prosecutor, Frederic Van Leeuw, said on Wednesday.

He did not specify whether “him” referred to Abdeslam.