State ‘under no particular threat’ from terrorism, Minister says 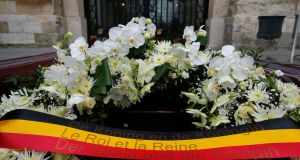 Acting Minister for Justice Frances Fitzgerald has said there is no specific information suggesting that the State is at risk of a terrorist attack.

However, she warned that the State is not immune from terrorism.

Speaking on her way into an emergency meeting of EU justice ministers in Brussels, Ms Fitzgerald said the introduction of armed policing at Dublin Airport and Dublin Port was a direct response to the threat of terrorism.

“It is an indication that while there is no particular threat to Ireland, obviously we share the democratic values of the countries who have been under attack and no country is immune from this type of terrorism,” she said.

“It is the democratic way of life and democratic values that are being challenged by terrorists, so obviously we have to take every security precaution that we can . . . armed patrols are a response to that.”

Her comments follow the news that gardaí are to take up an overt armed presence at Dublin Airport and Dublin Port for the first time amid growing concern about the threat posed by international terrorist groups.

It is understood the new Regional Support Unit (RSU) for the capital will be tasked with, among other things, providing a visible armed presence at both facilities.

It means gardaí wearing Swat-style uniforms and carrying high-velocity weapons will be on duty in and around the airport and port campuses and inside terminal buildings.

EU justice ministers are gathering in Brussels to discuss the greater coordination of security services in the wake of Tuesday’s terrorist attacks in the Belgian capital, which left more than 31 people dead and hundreds injured.

Arriving at the meeting, Ms Fitzgerald said she would be taking the opportunity during the meeting “to offer sympathy and condolences of the Irish people to the government and peopl e of Belgium in the face of this appalling tragedy”.

She said efforts should be made to see how countries can build on the national and international efforts to improve security coordination since the Paris attacks in November.

“I suspect that there will be greater focus . . . on border security, on the exchange of information between countries, particularly intelligence information, and on sharing information with transport authorities.”

The Minister said she would shortly be signing a statutory instrument to allow advance passenger information to be shared between the State and the UK.

“It is essential that we have sharing of information in the common travel areas, [which are] clearly an area of vulnerability.

“We have been in discussions with the home secretary.”

Asked if greater surveillance of internet activity should be considered, Ms Fitzgerald said: “I think we clearly have to examine all of the issues.

“Everywhere there is information that would help us to combat these appalling acts will have to be examined.”