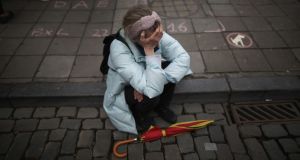 A woman pauses for thought after a minute’s silence was observed at the Place De La Bourse, in Brussels, yesterday. Photograph: Christopher Furlong/Getty Images

The three nail bombs that detonated on Tuesday in Brussels left a vicious trail of devastation, killing 31 and leaving 270 people from an estimated 40 countries injured. The scale of the injuries is shocking, according to treating doctors, who warn that the death toll is likely to increase in the coming days.

The Department of Foreign Affairs said no Irish citizens were killed or injured in the attacks, but the list of dead includes British, Peruvian and Indian citizens – as well as Belgian students, Brussels city employees and officials from the European Commission.

The first confirmed fatality was Peruvian national Adelma Tapia Ruiz (37), a mother of two who lived in Brussels and was at the city airport to see off relatives of her Belgian husband.

Ms Ruiz’s brother, Fernando Tapia Coral, said in an interview that his four-year old nieces went outside the gate area to play shortly before the blast. Since then he had been unable to find his sister.

“It is very complicated to describe this pain that we are feeling at home, but as the older brother, I know I have to try,” he wrote on Facebook.

“It is more difficult still to understand the way that destiny has snatched the life of a loved one, but even more incomprehensible is not being able to be close to her in this family tragedy that today knocked on the doors of my family.”

Other missing persons at Zaventem airport include two Dutch nationals from Maastricht who were on their way to the US.

Other airport injured included Sebastien Bellin, a Brazilian national and basketball player with the Belgian national team. Images on social media showed him lying on the airport floor in a pool of blood.

British authorities said four Britons were injured in the attacks, with several still missing, including computer programmer David Dixon, originally from Nottingham but resident for the last 10 years in Brussels with a partner and seven year-old son.

Among the victims of the Maelbeek metro blast were Olivier Delespesse, an employee of the local Wallonia-Brussels authority, and Indian tech worker Raghavendra Ganeshan, who took that metro line every morning to work.

At least 19 Portuguese citizens were injured in the three blasts, according to Belgian media reports.

Leopold Hecht (20), a law student in Brussels, is one of the youngest victims identified so far. His university said he was among the “unfortunate victims of the barbarous acts” at Maelbeek metro station.

King Philippe and Queen Mathilde of Belgium visited Zaventem airport yesterday, to pay their respects to the dead and show their gratitude to rescue teams.

They continued to a nearby military hospital which treated those injured at the airport. Dr Lieven Vergote, who treated up to 50 patients, said nail bombs used in the attack had left people with severe puncture and blast wounds. “The scale is shocking,” he told CNN.

It was a similar scene at the University Hospital in Leuven, east of Brussels, where bodies were brought of those killed in the airport bombing. Emergency department head Sandra Verelst said she had never witnessed such carnage.

The driver of the train attacked on Tuesday told Belgian state broadcaster RTBF that he had halted the train immediately after the blast. After first suspecting a technical fault, he soon realised the gravity of the situation.

“I did what I had to do. I had nothing, no injuries,” he told RTBF. “I immediately complied with the procedures, it is all I can say.”

About a dozen US citizens were injured in the attacks, including three Mormon missionaries and a US Air Force airman and four family members.

At least four US citizens are still missing, and US authorities said the situation in Brussels was still “fluid”. One of the US survivors, Mason Wells (19) from Utah, also escaped the Boston Marathon bombing three years ago.

His father, Chad Wells, said that his son had been standing close to one of the bombs and suffered head injuries, severe burns and a severed Achilles’ tendon.

The woman sitting bloodied and dazed in a photograph taken just moments after the bombings was identified as Nidhi Chaphekar, a Jet Airways (40) flight attendant and mother of two from Mumbai.

The photograph, taken by Georgian journalist Ketevan Kardava, quickly became one of the most haunting images from the attacks. The woman’s family in India saw the photo after Tuesday’s blasts and identified her.

“We were searching through the internet to try and get details of the blasts when we saw the pics,” her brother-in-law Nilesh Chaphekar told reporters. “The first reaction was ‘she’s alive, by God’s grace she is alive’.”

He added: “The last medical update we’ve had is that she’s responding well to medication. We have been told there are some fractures and burns but we don’t know the extent.”