People gathering to lay tributes in Brussels' Place de la Bourse square say they are saddened but not shocked by the deadly attacks on the city. Video; Reuters 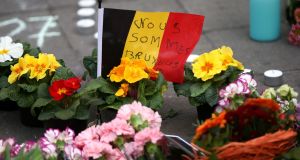 There are between 10,000 and 15,000 Irish people living in Belgium with around 700 working in the EU institutions in Brussels.

Cáit Hayes is one of them. She is a representative of the Houses of the Oireachtas to the EU and she first heard the news of an attack on Morning Ireland. She listens to the show on the RTÉ app every day and shortly after 8am (Brussels time) word came through that there had been an incident at Brussels Airport. Morning Ireland said they were going to Tony Connolly after a break so she decided to stay at home to listen.

“The news was sketchy enough at that time but it was still clear that one or two incidents had happened at the airport and that there was likely to be casualties and possibly even some deaths,” she said.

At 8.40am “and with a bit of a heavy heart” she set-off in the direction of the European Parliament to meet some colleagues. “Along the way I passed, as I do every day, Schuman metro station which is under the Barlaymont Building which houses the European Commission, Malbeek Station is less than a five minute walk from Schuman.” Almost as soon as she met her colleagues. “word started coming through to us that there had been an incident at either Malbeek or Schuman”.

The bomb had gone off between the stations.

She headed into the European Parliament and shortly after she got there it went into lockdown. “It’s been quite a surreal day and I guess I am just thinking “how lucky am I?” When I consider how many times I have travelled on that metro line getting on and off at Malbeek or Schuman or have travelled through Brussels Airport,” she said. “My thoughts are with the families and loved ones of the people who left for work this morning or were checking in at Brussels Airport and who will never come home.”

Ian McCafferty was getting off the metro at Arts-Loi, the stop just before Maelbeek, at around 8.20am when he heard what he described as a “loud muffled thud”.

There is “so much construction going on here that at first I didn’t really think much of it,” he said. He kept walking, heading out of the station on the way to his office near the European Commission. He looks after some of its social media content.

“I was actually on the phone to my mother. She had called to make sure I was okay after she had heard about the airport blasts. She is very vigilant when it comes to these things.”

As he approached the station exit he noticed people around “picking up the pace” and when the commuters got to the top of the metro station stairs “there was a large military presence and mass confusion. People started to run. Some people were crying. The two stations are only a stone’s throw apart.”

He calmly ended his call with his mother, without letting her know how close he had come to being caught up in the explosion. “We were the last train through the station before the blast,” he says now.

Tara Connolly works for Greenpeace and was attending a conference in the Thon Hotel close to where the metro blast occurred. “The first thing we were told was that they were going to use the hotel to treat the injured. We were asked to stay in the conference room and not to leave the hotel,” she said. “They didn’t want more panic on the streets.”

“For a while the conference continued. It was all a bit surreal. I could see the staff racing about getting the place ready for the wounded. Then after about an hour we were asked to leave.”

She has lived in Brussels for four years and was able to walk home from the hotel in 15 minutes. “The streets were almost deserted apart from a large amount of military personnel. There was a real sense of shock.”

Vera Coughlan was on her way to work in a legal firm on Rue la Loi opposite the Belgian PM’s office and the US embassy and on Tuesday morning she was trapped in her office after the street was completely locked down,” she said.

“No one could get in or get out and there were sirens blaring and armoured cars all over the place” and there was huge confusion. She was anxious to leave the building and go home but was very nervous. “We honestly don’t know if we are in the safest place in Brussels or the most dangerous. We are right beside the US embassy so obviously there is a lot of security there but then again it is also a major target. I just don’t know what to do.”