Ireland ‘is not immune’ to terrorism, warns Fitzgerald 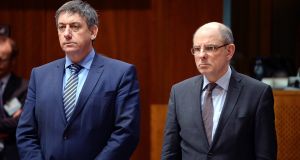 Ireland is not immune from the threat of terrorism, Minister for Justice Frances Fitzgerald warned yesterday, though she stressed there was no specific information suggesting the risk of a terrorist attack.

Speaking in Brussels at a meeting of EU justice and home affairs ministers, Ms Fitzgerald said that the commencement of armed policing at Dublin Airport and Dublin Port was a direct response to the threat of terrorism.

“It is an indication that, while there is no particular threat to Ireland, obviously we share the democratic values of the countries who have been under attack and no country is immune from this type of terrorism,” she said.

Her comments follow confirmation that gardaí are to take up an overt armed presence at Dublin Airport and Dublin Port for the first time.

EU justice ministers meeting in Brussels yesterday vowed to step up measures to counter terrorist threats, but proposed little in the way of new measures. Instead they urged all EU institutions and member states to pursue all ongoing work.

In a joint communiqué released after the three-hour meeting, justice ministers representing the 28 EU member states said the atrocities were “an attack on our open, democratic society”.

“We are appalled by these horrific terrorist acts, which we strongly condemn. We express our support and solidarity to Belgium, its people and the city of Brussels in particular.”

The meeting took place just 300 metres from where a suicide bomb exploded at Maelbeek metro station on Tuesday, killing at least 20 people.

Ministers also called for the adoption of new passenger name records legislation “as a matter of urgency”. The controversial directive would permit airlines to transfer information about passengers to national authorities. The legislation has been slowly moving through the EU legislative process, with France pushing for its swift adoption ever since the terrorist atrocities in November.

Separately, Ms Fitzgerald also confirmed that she would shortly sign a statutory instrument allowing the sharing of advance passenger information between Ireland and the UK. “It is essential that we have sharing of information in the common travel areas, clearly an area of vulnerability,” she said.

Justice ministers also pledged to intensify work with IT companies to counter terrorist platforms, and to develop a code of conduct against online hate speech by June.

Asked if greater online surveillance should be considered, Ms Fitzgerald said: “I think we clearly have to examine all of the issues. Everywhere there is information that would help us to combat these appalling acts will have to be examined.”

Yesterday’s meeting was attended by Belgian justice minister Koen Geens who, earlier in the day along with interior minister Jan Jambon, had offered his resignation to prime minister Charles Michel. Mr Michel turned down the resignations.

Belgium’s police and security personnel are facing mounting criticism following allegations that the police were informed by Turkey that one of the Brussels airport bombers was a known jihadist.