How media around the world are reporting on the Brussels attacks

‘Europe’s open societies, even under states of emergency, will never be risk-free’ - NYT 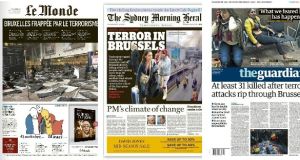 The attacks in Brussels are making front pages around the world

The Brussels attacks are the leading story around the world on Wednesday. Here is a selection of what is making the front page, home page and editorials, globally.

The Guardian
The Guardian’s editorial, "Murderous but not war", says that the perpetrators of the attack should not be dignified by “calling their terrorism ‘war’”, and criticises French prime minister Manuel Valls for using the word “war” yesterday:

“To speak of “war”, and especially of a war potentially engulfing the whole of Europe, as the French prime minister Manuel Valls did hours after Tuesday’s attacks, sets dangerous traps while offering no convincing solutions...

"Isis is indeed fighting wars, sometimes with the west involved, in those Middle Eastern and African territories where the insurgency has taken hold. But it is not fighting a true war in Europe, and the continent should not talk itself into believing it is fighting one either. Mr Valls is wrong, and his words are dangerous. Talk of war amounts to handing Isis the victory it seeks.”

Le Monde
The French newspaper’s front page leads with the headline “Brussles struck with terrorism” with a picture of the bombed  departures hall taking up much of the page.

The paper also features a poignant image of a weeping French flag with a human face putting an arm around its Belgian neighbour, created by its cartoonist, Plantu (Jean Plantureux).

New York Times
The New York Times' front page leads with “Brussels attacks shake European security”. The paper carries two stories, one about the “carnage and mayhem” that followed the blast, and another about how the attacks underscore the vulnerability of an open European society:

“The new attacks again underscored not only the weaknesses of Belgium’s security services, but also the persistence and increasingly dangerous prospect of what several intelligence experts described as a sympathetic milieu for terrorist cells to form, hide and operate in the centre of Europe.

"Some security and intelligence experts saw Tuesday’s blasts as proof that Europe’s open societies, even under states of emergency, will never be risk-free. But the risks are fatally compounded, some said, by European-wide failures in intelligence sharing and the weakness of a Belgian intelligence service that Mr. Squarcini said lacked the capacity to pick up the “weak signals” of emerging plots.”

“More than at any time since 1940, America’s commitment to its European allies is at issue in a presidential campaign. The tragic events of Brussels illuminate the folly of Mr. Trump’s position. The Islamic State has targeted all Western democracies, along with Israel and the Sunni states of the Middle East; it regards Belgians and Americans equally as enemies. Destroying the group — as Mr. Trump says is necessary — cannot be done without fighting its tendrils wherever they appear — in Europe as well as the Middle East, in Africa and in cyberspace. However much they are reinforced, borders will provide no protection to Americans if the jihadists are not defeated elsewhere.

"To defeat the Islamic State without NATO’s help would impose huge costs on Americans. Britain, France and Germany, among others, contribute materially to the war against the terrorist entity in Iraq and Syria, not to mention NATO member Turkey.”

The Sydney Morning Herald
The Australian newspaper leads with “Terror in Brussels”, detailing how the attacks killed at least 13 and injured more than 30, and given the time difference, was printed on the facts known at the time of publication. Their latest story, includes details from the local mayor, Francis Vermeiren:

“The three suspects captured on CCTV travelled to the airport by taxi, according to local mayor Francis Vermeiren. 'They came in a taxi with their suitcases, their bombs were in their bags,' he told AFP. `They put their suitcases on trolleys, the first two bombs exploded. The third also put his on a trolley but he must have panicked, it didn’t explode.' He said bomb disposal experts later blew up the suitcase that didn’t explode."

BBC
BBC.com leads with ongoing reports of events in Brussels as they unfold. One of their main pieces asks the question, “Why has Brussels been attacked?”:

“Not only is Brussels a high-profile target for Islamists, Belgium has struggled with Islamist groups for years and hundreds of its citizens have been lured into fighting for IS in Syria and Iraq. Several cities have housed Islamist cells, but the most active have been in Brussels and in the south-western suburb of Molenbeek in particular - an area with a high ethnic Moroccan population. Several of the bombers and gunmen who targeted Paris last November, killing 130 people, had been living in Molenbeek.”

Aljazeera
An opinion piece published by Aljazeera.com, “The slaughter of the innocent in Brussels”, by Iranian professor Hamid Dabashi addresses the issue of islamophobia. Professor Dabashi  says:

“Muslims must not fall into the trap of saying they are innocent and have nothing to do with these acts of violence...The more Muslims defend themselves, the more well-intentioned people in the United States and European Union keep exonerating Muslims, the more vicious this cycle perpetuates itself.”

Der Spiegel
Germany’s Spiegel Online leads with “ Terror in Brussels: A Wounded City Searches for Answers”, and asks who could be responsible for the attacks:

“In an English-language text released on Tuesday afternoon, the Islamic State terrorist militia claimed responsibility for the attack, but it did not provide any specific details or names that might help to verify the authenticity of the claim. That, though, is not unusual.

"The blueprint followed by the perpetrators suggest the hallmarks of an IS attack. Security officials are also considering the possibility that the Brussels attacks may have been a retaliatory act in response to the arrest in Belgium on Friday of Salah Abdeslam, one of the suspected perpetrators of the Paris attacks.”

The Brussels Times
The Belgian website leads with a number of stories on yesterday’s attack, including a story about how the economic cost of the attacks to the country is estimated to be €4 billion.