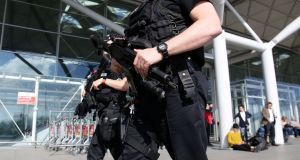 Gardaí are to take up an overt armed presence at Dublin Airport and Dublin Port for the first time in the face of growing concern about the threat posed by international terrorist groups.

It is understood the new Regional Support Unit (RSU) for the capital will be tasked with, among other things, providing a visible armed presence at both facilities.

It means Garda members wearing Swat-style uniforms and carrying high-velocity weapons will be on duty in and around the airport and port campuses and inside terminal buildings.

There is currently no armed presence at either the airport or port in Dublin. This has been a cause of growing unease in security and political circles.

The Special Detective Unit and Emergency Response Unit (ERU) have always been the first line of response in the event of any major incident, but neither unit has a presence in the port or airport.

Minister for Justice Frances Fitzgerald unveiled plans for the unit during last month’s feuding between gangland factions, but the project’s inception dates back to last year.

The internal recruitment process within the Garda for places in the unit has just closed.

There are already other RSUs based in the regions.

It is understood the possibility of using the Dublin RSU at the port and airport had been under consideration before Tuesday’s attacks.

But senior sources said the final decision to press ahead with the plan emerged after a meeting yesterday morning at Garda Headquarters in the Phoenix Park in Dublin.

The terrorist strike in Brussels means international airports, rather than just the flights in and out of them, are now seen as targets for further atrocities.

And while the likelihood of an attack in Ireland is no higher than it was before this week, the lack of an armed Garda presence has been brought into focus.

The Dublin RSU will conduct a variety of other tasks such as responding to armed incidents and patrolling in gangland flashpoints.