Bombings show resilience, reach and sophistication of the militants’ operations 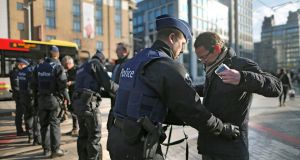 The murder of 34 people in twin bomb attacks in Brussels claimed by Islamic State points to the resilience, reach and sophistication of the militants’ operations in Europe.

Months of intense detective work into Belgian jihadi connections to the Paris attacks, heightened security measures and an anti-terrorist swoop on a key suspect in Brussels failed to prevent yesterday’s killings.

The attacks came just four days after the arrest of Salah Abdeslam – the Moroccan-born Isis-aligned target of Europe’s largest manhunt for his alleged role in the November attack in Paris.

“What we feared has come to pass,” Charles Michel, Belgian prime minister, said as his country reeled in shock at the killings.

The latest Isis atrocity to hit Europe appears to have been well planned. The scale of the destruction at the airport suggests Isis jihadis have access to increasingly powerful explosive devices.

The key issue is whether it was carried out by jihadis linked to Mr Abdeslam or was the work of a separate Isis network unknown to intelligence agencies.

Either way, it suggests Isis’s capabilities in Belgium, and possibly beyond, are more extensive than previously thought.

“Even if this was some kind of relatively short-notice response to the arrest of Salah Abdeslam, then what it suggests is an ability to co-ordinate an attack at very short notice; something not on the scale of Paris but still logistically pretty complex,” says John Drake, a terrorism and security expert who has followed jihadi attack planning closely in Iraq.

That it took Belgian police four months to track down Mr Abdeslam also suggests he had sophisticated logistical support from sympathisers.

“I have been saying since the attacks on November 13th that there is a network, a network of individuals who know each other, who live in the same neighbourhood, they are thugs, delinquents,” said Françoise Schepmans, mayor of Molenbeek, on Belgian state television at the weekend.

As far back as January 2015, US intelligence began warning policymakers that Isis appeared to be assembling a terrorist network in Belgium following the disruption of a cell in the southeastern town of Verviers.

There is evidence the Verviers cell was directly connected to the Paris plotters: Abdelhamid Abaaoud, the alleged co-ordinator of the Paris attacks who was killed in a raid on his Saint-Denis flat in the French capital, was also the purported leader of the Verviers group.

Since impressionable, mostly young, radical Muslims began flocking to fight in Syria’s civil war three years ago, counterterrorism chiefs across Europe have warned of the risk of retaliation from the conflict.

On Monday, France’s Centre for the Analysis of Terrorism published its latest figures on the number of citizens lured from the continent to fight under the banner of radical jihadism: 2,030 from France, 1,600 from the UK, 800 from Germany and 534 from Belgium.

According to one senior UK intelligence source, close to half of those who have travelled to Syria to fight for Isis have made it back into Europe.

Faced with such a nebulous threat, European security agencies are failing badly. Even in its immediate, confused aftermath, the Belgian attack shows that the operational depth of Europe’s jihadis has once again been underestimated. Copyright The Financial Times Limited 2016