Belgian police arrest six people in their probe of Tuesday's Islamic State suicide bombings in Brussels, while authorities in France said they thwarted a militant plot there 'that was at an advanced stage.' Video: Reuters 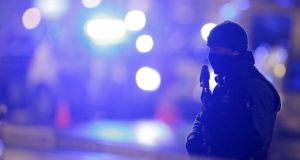 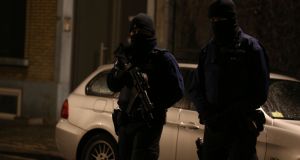 Six people were arrested on Thursday in a series of police operations in the Belgian capital. Photograph: Nicolas Maeterlinck/ AFP/Getty Images

Six people have been arrested in Brussels as the search continues for up to two suspects believed to be on the run following Tuesday’s terrorist attacks.

It is not clear if the arrests are connected to Tuesday’s twin terror attacks in Brussels which left 31 people dead and up to 300 people injured.

In a separate development, a French man believed to be in “advanced stages” of a plot to attack the country was arrested yesterday north of Paris.

Interior minister Bernard Cazeneuve said there were no links “at this stage” between the plan and the attacks in Paris or Brussels. He said bomb squads were on site after a raid in Argenteuil, on the northern outskirts of the French capital, and the person was implicated at a “high level” in the plot.

Belgian authorities were last night searching for a potential fifth suspect in Tuesday’s terrorist attacks in Brussels, as criticism of the country’s police and intelligence services mounted.

Officials believe there was a second, unidentified bomber in the attack on Maelbeek station on Tuesday and that he may be on the run. The other bomber, Khalid el-Bakraoui, died in the explosion.

Suspected terrorists Ibrahim el-Bakraoui and Najim Laachraoui died in the twin attack at Brussels airport. A third man who was with them is believed to be on the run.

About 150 people remain in hospital following the attacks, 60 of them in a critical condition.

Mr Jambon, a Flemish nationalist who has become the face of Belgium’s response to the threat of terrorism, conceded that authorities had “missed the chance” to seize airport bomber Ibrahim el-Bakraoui.

Turkey has accused Belgium of ignoring warnings about el-Bakraoui’s terrorist links after he was twice expelled from the country.

Belgian media reported that the younger el-Bakraoui brother, Khalid, had broken the terms of his parole in December but prosecutors had allowed him to walk free.

Despite a manhunt still being under way across the city, authorities lowered the security level from four to three yesterday evening. Brussels airport will remain closed until at least Monday.

Salah Abdeslam, the main suspect in the Paris terrorist attacks, who was arrested in the Brussels district of Molenbeek a week ago, will not fight extradition to France, his lawyer confirmed.

Abdeslam is understood to be in a high-security prison near Bruges. A court hearing on his detention has been postponed until April 7th.

As Belgium observed a second day of mourning, EU justice ministers gathered for an emergency meeting in a building just 300 metres from the site of the metro attack.

Minister for Justice Frances Fitzgerald said the meeting was an opportunity “to offer [the ] sympathy and condolences of the Irish people to the government and people of Belgium in the face of this appalling tragedy”.

She also called for greater co-ordination between EU member states on intelligence-sharing.

She said that while there was no specific information suggesting the risk of an imminent attack in Ireland, the State was not immune from the threat of terrorism.

The commencement of armed policing at Dublin Airport and Dublin Port was a direct response to that threat, she said.

“It is an indication that while there is no particular threat to Ireland, obviously we share the democratic values of the countries who have been under attack and no country is immune from this type of terrorism.

“We have to take every security precaution that we can [and]armed patrols are a response to that,” she said.