How did two people, from the same family and background, choose two so very different paths? 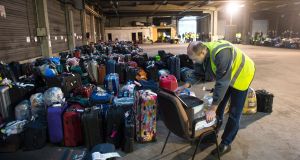 An agent looks on his computer near luggage collected from the planes, which were on the tarmac at the time of the attacks in Brussels. Photograph: Lauie Dieffembacq/ AFP /Belga/Getty

They came one by one to collect the possessions that were abandoned and lost during the chaos of Tuesday morning.

Up to 6,000 suitcases, most of which had already been boarded onto planes before the terrorist attacks struck at Brussels Airport, were lined up in a hangar waiting for their owners, a potent visual reminder of the human tragedy that unfolded there three days ago.

The process of reclaiming lost luggage was another step for those caught up in Tuesday’s terrorist attacks, another stage for a city still coming to terms with the atrocities that left at least 31 people dead and up to 300 injured.

More signs of normality returned to Brussels on Friday, even as the city seemed strangely quiet as expats tried to reschedule travel plans and head away for Easter.

At the Catholic Church at the end of my street the bells rang out for the Good Friday service.

The square had been packed with cars the previous evening for Holy Thursday.

But as Brussels’ residents prepared for an Easter weekend edged with sadness, serious questions remain unanswered.

It seemed that almost every hour new details about the suspected bombers were emerging from the country’s French and Flemish-language media outlets.

Najim Laachraoui, the 24 year old Belgian man who blew himself up at Brussels Airport on Tuesday, had been an engineering student at Libre de Bruxelles (ULB) but had dropped out.

Suspected to be a key protagonist in a Brussels-based terrorist cell, traces of his DNA was found in the Schaerbeek apartment where the suicide vests used in the Paris attacks were made.

He is known to have travelled to Syria in February 2013.

One former classmate posted a group photo on Facebook of eight students including Najim, adding that he was completely “shocked” at his involvement in the attacks.

Najim’s brother Mourad, a TaeKwando champion who had proudly represented his country in the sport, condemned his brother’s actions.

The two brothers’ divergent stories provided a readymade sociological case-study - how did two people, from the same family and background, choose two so very different paths?

Further incriminating stories about the police investigation in the run-up to the attacks have also emerged - revelations that police questioned Salah Abdeslam for only one hour between his arrest last Friday and Tuesday’s attacks, with some analysts suspecting that Abdeslam himself may have planned to take part in Tuesday’s attacks.

Another report claimed that an inquiry was underway into why information on where Salah Abdeslam was believed to have been hiding since December had not been passed on by a local police force to the anti-terrorism section of the federal police.

There are also unconfirmed reports that Khalid and Ibrahim el-Bakraoui, the brothers who blew themselves up within an hour of each other at Brussels airport and Maalbeek metro station on Tuesday, may both have been on a US terror list before the attacks.

With these details comes an increasing focus on the political fallout from the attacks.

While two senior ministers - interior minister Jan Jambon and justice minister Koen Geens - offered their resignation at a cabinet meeting on Thursday this was declined by prime minister Charles Michel, despite the fact that Jambon conceded that authorities had “missed the chance” to seize airport bomber Ibrahim el-Bakraoui when he was identified in Turkey.

As further details of the police handling of the investigations, pressure is likely to continue on the government in the coming days.