City dwellers return to their routines slowly, still fearful after the massacres 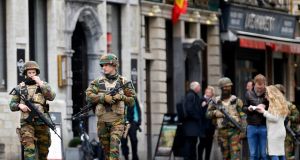 The alarm went off just before 11am, sending soldiers racing up the ramp to the grey tower of Queen Astrid Military Hospital, north of Brussels.

This is where the crisis centre for relatives of the Brussels attacks has been set up and, three days after the airport and metro blasts, the concern was evident in the faces streaming out of the hospital past the Red Cross jeep in the hospital hallway. There were nurses in blue, crisis psychologists in vests, a cluster of doctors in white coats and people in street clothes with lined, tired faces.

As fire engines and military vehicles roared up, sirens blaring, the explanation for the evacuation eventually came: a gas leak. People clustered outside the door and lit up cigarettes to calm their nerves. That prompted an agitated soldier to begin herding everyone away from the main door and on to the nearby grass.

“I’ve not had much sleep in the last days,” said a young man from the hospital crisis team, who declined to give his name. “I really don’t need this evacuation, it’s not good for my nerves.”

The makeshift shrine around the Place de la Bourse is a free-wheeling safe space for locals who want to talk, sit or get a “free, original Syrian hug” from a young man. The pavements and the walls of the neo-classicist old stock market are covered in colourful, chalked messages of love, defiance and anger. On three sides of the square, the world’s television stations have set up outside broadcast units, interviewing a steady stream of locals.

But, flapping in the breeze, are reminders of why everyone is here: multilingual missing person notices.

“Have you seen my Madeleine Atlegrim?” asks one, over pictures of a bespectacled young woman soon to celebrate her 31st birthday.

Reality creeps in as you head through the city: soldiers with machine guns checking bags of metro passengers; cafe visitors hesitating before choosing where to sit, unsure whether or not to take that table beside the Arabic-speaking men with bags.

“I’m more annoyed that there’s no one to get annoyed at yet, except the police,” said Sandra, a young woman in a cafe adjacent to Brussels North station. Belgian prosecutors say they have established several links between the two suicide bomber brothers involved in Tuesday’s Brussels attacks and the Paris attacks last November.

But a Brussels court heard that Salah Abdeslam, the leading suspect in last November’s Paris attacks, “didn’t know” about Tuesday’s attacks in the Belgian capital.

With at least 31 dead and dozens still missing, authorities say about 300 people were injured by the three nail-bombs in Brussels airport and metro.

About 61 people are still in a critical condition, according to Belgian health minister Maggie de Block, meaning the death toll is likely to rise.

Tragic stories of the Brussels attacks continued to emerge yesterday, like that of young German couple Lars and Jennifer. A year after marrying, the handball-loving couple from nearby Aachen were at the American Airlines counter in Zaventem airport on Tuesday morning for a long-delayed trip to New York.

“We know that Lars is seriously injured in a coma. We know nothing of my niece,” said Claudio Scintu, uncle of Jennifer, to the Bild tabloid. “Authorities have told us to expect the worst.”

After the Tuesday airport bombings, Dixon, who has lived in Brussels for 15 years, texted his family to say he was okay. But he has not been heard from since a third suicide bomber blew himself up in the metro an hour later, with fears growing that he was on the doomed train.

Friends and relatives have been searching for David in city hospitals and have given his dental records to police.

“We’ve not heard anything back from them and it’s just a case of waiting,” said Charlotte Sutcliffe, his partner, to the Daily Telegraph. “We’re in their hands now, but it’s very, very difficult.”