Death toll may rise above 31 with over 60 people still critical after metro, airport blasts 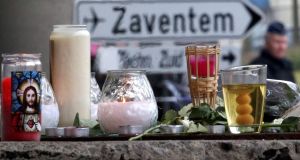 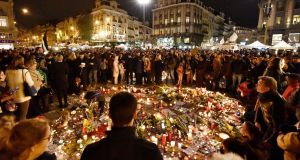 Hundreds of people come together at Place de la Bourse on Wednesday evening to mourn the dead and injured following the Brussels attacks. Photograph: AP 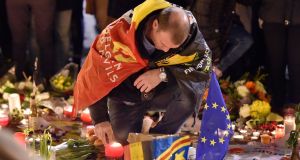 People bring flowers and candles at Place de la Bourse, Brussels, to mourn for the victims of the bomb attacks. Photograph: AP 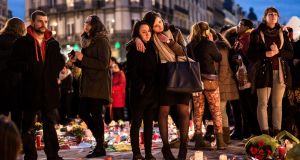 People gather at a memorial in Brussels to mourn the dead and injured. Photograph: AP 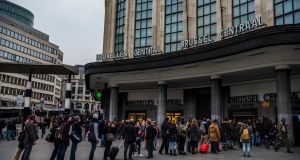 Commuters wait in line to have their belongings searched before entering Central Station in Brussels. Photograph:Daniel Berehulak/The New York Times

Belgium’s interior and justice ministers offered to resign on Thursday over the failure to track an Islamic State militant expelled twice by Turkey as a suspected fighter last year and who blew himself up at Brussels airport this week.

Ibrahim El Bakraoui was one of three identified suspected suicide bombers who hit the airport and a metro train, killing at least 31 people and wounding some 300 others on Tuesday in the worst attack in Belgian history.

Turkey’s president had criticised Belgium on Wednesday for failing to track Ibrahim El Bakraoui, a convicted armed robber whom it expelled last year and who blew himself up at the airport on Tuesday an hour before his brother Khalid, a fellow convict, killed about 20 people at Maelbeek metro station in the city centre.

Belgian and Dutch authorities had been notified of Turkish suspicions that he was a foreign fighter trying to reach Syria. At the time, Belgian authorities replied that Bakraoui, who had skipped parole after serving less than half of a nine-year sentence for armed robbery, was a criminal but not a militant.

The security lapses in a country that is home to the headquarters of the European Union and Nato have drawn international criticism of an apparent reluctance to tackle Islamist radicals effectively.

Interior minister Jan Jambon and justice minister Koen Geens tendered their resignations to prime minister Charles Michel, who asked them to stay on.

“In time of war, you cannot leave the field,“ said Mr Jambon, a right-wing Flemish nationalist.

Their offer comes as evidence piles up that the jihadist network behind Tuesday’s attacks was involved in the deadly Paris attacks last November.

Islamic State posted a video on social media on Thursday calling the Brussels blasts a victory and featuring the training of Belgian militants suspected in the November 13th shootings and suicide bombing rampage in Paris that killed 130 people.

Belgium’s health minister Maggie de Block said 61 of those hurt in the attacks were in a critical condition, and suggested that the death toll could rise beyond 31.

At least one other man seen with the airport attackers in security footage is on the run and a fifth suspected bomber filmed at the time of the metro attack may be dead or alive.

The man was spotted on security cameras carrying a heavy bag, but his identity was unknown and it was not clear if he had died or escaped. A computer-generated image showed a young man with hollow cheeks, a tiny goatee beard and thick black eyebrows.

Security sources said the other suicide bomber at the airport was Najim Laachraoui, a veteran Belgian Islamist fighter in Syria suspected of making explosive belts for November’s Paris attacks, who also detonated a suitcase bomb at the airport.

The third suspect captured on airport security cameras pushing a baggage trolley into the departures hall alongside Laachraoui and Ibrahim El Bakraoui is now the target of a police manhunt. He has not been named.

The bespectacled man wearing a cream jacket and a black hat ran out of the terminal, federal prosecutors said, and a third suitcase bomb, the biggest of the three, exploded later as bomb disposal experts were clearing the area.

Belgium’s foreign minister Didier Reynder said that more than 40 nationalities may have been caught up in the attacks. No Irish citizens were killed.

Minister for Justice Frances Fitzgerald joined ministers from across the EU for an emergency justice and home affairs meeting on Thursday in Brussels.

She said the introduction of armed policing at Dublin Airport and Dublin Port was a direct response to the threat of terrorism.

“It is an indication that while there is no particular threat to Ireland, obviously we share the democratic values of the countries who have been under attack and no country is immune from this type of terrorism,” she said.

Calls are growing for greater European co-operation in security and intelligence affairs to thwart future attacks, though there is disunity over French claims that Europe is “at war” with Islamist extremism.

German officials declined to echo remarks by French prime minister Manuel Valls that Islamist terrorism had “declared war not only on France and on Europe, but on the world”.

Asked if chancellor Angela Merkel shares this view, a German government spokesman said “everyone chooses their own words”.

Ahead of the meeting, German interior minister Thomas de Maiziere said it was “useless” if EU member states refused to share their national “intelligence pots”.

Earlier, Belgium’s King Philippe, Mr Michel and European Commission president Jean-Claude Juncker attended a memorial event outside at the Belgian parliament, while hundreds of ordinary Belgians observed a minute‘s silence at a makeshift shrine with candles and flowers outside the Brussels bourse.

“The cries of distress and pain, the sirens and the apocalytic images will remain forever engraved in us,” Mr Michel said. “Our country is in shock, but we are strong. No one will bring down this democracy.”

Meanwhile, a Brussels court heard on Thursday that the leading suspect in last November’s Paris attacks “didn’t know” about Tuesday’s attacks. A lawyer for Salah Abdeslam, arrested last week in Brussels, said his client would not fight his extradition to France.

A court hearing in Brussels on Mr Abdeslam’s detention has been postponed until April 7, agreeing to a request from Mr Mary.

“Salah Abdeslam has asked me to inform you that he wishes to leave for France as quickly as possible,” Mr Mary told journalists outside the court, adding that his client “wants to explain himself”.

Brussels airport said there would be no flights before Monday at the earliest, with the departure hall sealed off by investigators. Travellers on the busy Easter weekend were diverted to Antwerp, Liege and the northern French city of Lille.