Brussels attacks: Italy used as route and base by suspects 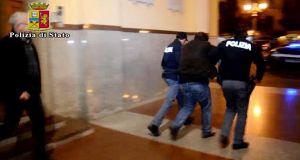 Italian Police escort a man, centre, to a police car in the southern city of Salerno, Italy. Police identified the man arrested as an Algerian wanted in Belgium for facilitating illegal migration linked to the recent terror attacks in Paris. Photograph: AP

Last Wednesday evening, on the day after the bomb attacks on Brussels airport and underground, Moroccan Mohammed Lahlaoui was arrested by German police in Giessen, a town 70km from Frankfurt.

Carrying out a routine document check, the Giessen police realised they were dealing with a North African with an extensive criminal record, which included drug trafficking and attempted murder.

When the police then examined Lahlaoui’s mobile phone, they came across links to the men who had carried out the previous day’s attacks in Brussels. For example, one of the last messages on the phone had been sent to Khalid el-Bakraoui, one of the two suicide bomber brothers.

Sent just minutes before el-Bakraoui blew up himself and 20 others on the Brussels metro, the message contained just one word, “Fin” or the end.

Lahlaoui (28) represents just one of a number of connections between Italy and both the Brussels attacks and those of last November in Paris. From 2007 to 2014, Lahlaoui had lived in the province of Brescia, Lombardy, where he had made himself well-known to local police because of his criminal activity.

Investigators believe both men travelled through Italy last summer on their way to Greece, perhaps to a “planning” meeting. Italian media reports claim that Greek police found detailed maps of Brussels’s Zaventem airport in an Athens apartment, lived in by Abdelmaid Abaaoud, a childhood friend of Abdeslam.

In late July or early August, Abdeslam drove to Italy from Belgium, going all the way south to Bari to catch a boat for Patras in Greece. El-Bakraoui flew into Treviso from Brussels on July 23rd, flying on to Athens from Venice the next day. Both men may have reasoned it was easier to move in and out of Italy than other countries.

Among the various false identities used by el-Bakraoui was that of a Moroccan footballer, Ibrahim Maaroufi, who once played for Milan Serie A team, Internazionale, and who now plays for Belgian team Schaerbeek, the side from the Brussels municipality where the el-Bakraoui suicide bomber brothers lived.