Attacks are a way for Islamic State to re-emphasise its destructive capabilities in Europe, despite recent setbacks in the Middle East 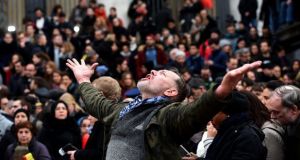 A man reacts as people gather to observe a minute of silence in memory of the victims of the Brussels airport and metro bombings, on the Place de la Bourse in central Brussels. Photograph: AFP

Brussels was struck Tuesday by major, apparently coordinated terrorist bombings, at the airport and on the metro system, killing at least 31 people and injured an estimated 250. The attacks at the heart of the de facto capital of the European Union occurred only four days after the arrest in the city of Salah Abdeslam, Europe’s ‘most wanted man’ and one of Belgians linked to the Paris atrocities in November. He was caught after an intense police shootout, and Belgian authorities had previously warned of potential reprisal actions, of which the attacks may be one.

With the Belgian government now on the highest state of alert, and Brussels ‘locked down’, it appears that the self-ascribed Islamic State (IS) terrorist group was responsible for the attacks, amongst the worst terrorist crimes on European soil in recent years. In subsequent raids in Brussels, authorities have discovered an IS flag and also a stack of chemical products, plus explosive devices containing nails.

While key uncertainties remain, there are signs of potential connections between Tuesday’s atrocities and Abdeslam’s arrest, as underlined by the comments of Belgian Foreign Minister Didier Reynders, who said at the weekend that Abdeslam “was ready to restart something in Brussels, and it may be the reality because we have found a lot of weapons, heavy weapons…and a new network around him in Brussels”. A similar point was made by Belgian Prime Minister Charles Michel who asserted on Tuesday that “what we feared has happened”.

Key questions will now be asked about the preparedness of Belgian and wider European intelligence agencies for such attacks. This will be fuelled by Belgian Interior Minister Jan Jambon’s comments on Tuesday that “it was always possible that more attacks could happen but we never could have imagined something of this scale”.

While the full list of perpetrators of the attacks are not yet known, Belgian media said on Wednesday that two suicide bombers were brothers Ibrahim and Khalid El Bakraoui, who were reportedly involved in Friday’s shootout in Brussels when Abdeslam was apprehended, and who were already been sought by authorities for their potential links to November’s Paris attacks.

This and the fact that the atrocities appear to have been undertaken by IS will fuel concerns of world leaders about European citizens radicalised and drawn to IS by its propaganda. And also the inter-related issue of foreign jihadists who have returned to their home countries in Europe from the Middle East, especially post-last year’s Paris terrorist atrocities.

There were connections, for instance, between some of November’s Paris terrorists and Syria, with, for instance, Omar Ismail Mostefai, one of the attackers at the Stade de France, reportedly travelling to the Syria in 2013 and returning to France in 2014. Moreover, Sami Amimour, one of the Bataclan terrorists, apparently travelled to Syria in 2013 and returned the following year too. And only last weekend, Belgian prosecutors named one of the two men still sought in connection with the Paris attacks as Najim Laachraoui who reportedly travelled to Syria in 2013.

The numbers of foreign fighters who have already returned from the Middle East to their home countries is not certain. However, the International Centre for the Study of Radicalisation at Kings College London estimates that as many as 11,000 foreign fighters overall may have fought in Syria alone, from some 74 countries, the majority from Arab countries.

A central concern is that a significant number of these individuals, who include potentially as many as 2,000 from Western Europe, plus others from North America, Australia, South-east Asia, and Africa, will return battle hardened with significantly greater terrorist capability and resolve. And it is believed that, per capita, Belgium is Europe’s biggest contributor of fighters to Syria, with Brussels a particular hot spot, despite the fact that Tuesday’s attacks have been condemned by Islamic groups in Belgium.

US President Barack Obama has already expressed his “deep concern” about this issue, echoing comments of others, including British Prime Minister David Cameron. Moreover, FBI Director James Comey has even warned about the prospect of a “future 9/11” caused by the increased flow of such foreign fighters from the Middle East. In his view, “all of us with a memory of the 1980s and 1990s saw the line drawn from Afghanistan. to September 11. We see Syria as that, but an order of magnitude worse”.

What this underlines is that while Belgium was targeted in Tuesday, cities right across the continent are potentially vulnerable, as the Paris attacks showed last year. This fact has been recognised by leaders including French President Francois Hollande who noted Tuesday’s attacks struck at “the whole of Europe”, and confirmed that the continent was at war with the jihadists, and that “vital steps in the face of the seriousness of the threat” must be taken.

And the fact that this is an European wide issue is reflected in the tightening of security across key sites across the continent. For instance, French Interior Minister Bernard Cazeneuve announced that he was deploying some 1,600 additional police to border crossings and air, sea and rail infrastructure.

Meanwhile, it emerged earlier this month, only days before these latest attacks, that London’s police and security forces are working on the possibility that the English capital could be hit by up to 10 attacks on the same day. What this reinforces is the fact that IS planning appears to be increasingly centred around multiple, sequenced atrocities, as Brussels underlines.

With IS apparently behind the attacks, this will provide an unfortunate propaganda coup for the jihadist group at a time when its fortunes in Iraq and Syria may be ebbing with some reports that it may have lost around a fifth of the territory under its control in those two countries over the past 14 months, and potentially 40% of its revenue, much of it from oil, according to research company IHS. In that sense, Tuesday’s terrible actions are a way for the network to try to re-emphasise to international publics that it has a continued destructive capability in Europe, despite recent setbacks in the Middle East.

Andrew Hammond is an Associate at LSE IDEAS (the Centre for International Affairs, Diplomacy and Strategy) at the London School of Economics