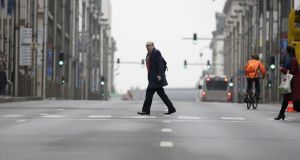 Pedestrians cross a street in the European Quarter near Maelbeek metro station in Brussels a day after triple bomb attacks in the Belgian capital. Photograph: Kenzo Tribouillard/AFP/Getty Images

As the sun rose over Brussels this morning, residents of the Belgian capital awoke to a new reality.

On Tuesday, terror struck at the heart of this city as at least 34 people were killed and hundreds more wounded in two terrorist attacks.

This morning, life was slowing getting back to normal.

By 7.30 am, the roads around the city were filling up with traffic. On Tuesday the entire bus, tram and metro station shut down - the familiar electronic signs at bus stops across the city simply told people that “due to an incident” in Brussels, services were not running.

By Wednesday morning buses trams and metros were operating, albeit with limited service. Sixteen of the city’s 69 stations were open this morning.

Remarkably, Schumann metro station, which serves the EU headquarters, was open, though soldiers were checking the bags of each person who descended the escalator to the metro station to catch the 1 or 5 train. The station further down the track at Maelbeek remained closed.

While Belgium has been put at the highest level of alert, there is no “lockdown” in place. Schools, local administrative offices and shopping centres have remained open. In reality, however many people have chosen to remain at home.

A number of meetings at the European Commission, Council and Parliament have been cancelled as have numerous events that were scheduled to take place in conjunction with many of the EU institutions. Most of the European schools around the city had already begun the Easter vacation this week.

VUB, one of the city’s main universities, has suspended classes for the rest of the week.

A number of the city’s underground tunnels have been closed to traffic. Brussels Airport remains closed until at least Thursday. Flights arriving have been diverted towards other regional airports such as Charleroi, Liège, Ostende or international airports. There are no departures today.

Eurostar services to London have resumed.

As three days of mourning commences in Brussels, most high-profile events such as sports events and concerts are expected to be cancelled.

Since the attacks happened, the airwaves have been filled with stories of people offering help to those affected by Tuesday’s events, with many offering car-pooling services or accommodation to anyone stranded in Brussels.

On-air psychologists are also dispensing advice on how best to communicate what has happened over the last few days to children.

Just 24 hours after deadly terrorist attacks ripped through Brussels, people are still desperately trying to come to terms with an attack that has struck at the heart of the Belgian capital.