Book of condolences for Brussels attacks victims opens in Cork 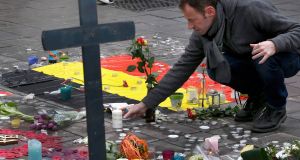 The Lord Mayor of Cork, Cllr Chris O’Leary, on Wednesday opened a book of condolences at Cork City Hall for the victims of the Brussels terrorist attacks.

Cllr O’Leary said that it was important that the people of Cork show solidarity with the people of Brussels and the Belgian flag would also be flown over City Hall in a show of support.

“We decided to raise the Belgian flag in solidarity with those who lost lives in Brussels and those who were injured - our deepest condolences go to those in Brussels,” he said.

Cllr O’Leary told Cork’s 96FM that the book of condolences would be available for signing for a fortnight in the atrium of Cork City Hall.

Meanwhile it has emerged a group of Geography students from University College Cork who were on a field trip with two of their lecturers to Brussels are safe and well.

The Department of Foreign Affairs have confirmed that 30 students and staff have been in touch to say that they are safe and well in a hotel in Brussels and are due to return to Cork tomorrow.