Belgium struggling with tragedy amid error and inefficiency

As suspects remain at large, the country seeks to manage its complex politics 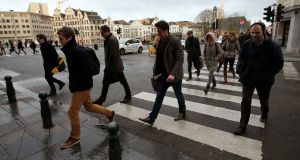 Commuters near Brussels Central Station as they return to work after the Easter holidays. The mayor of Brussels, Yvan Mayeur, says the EU’s capital can never go back to “normal” again. Photograph: AP Photo/Alastair Grant

More than a week after terrorist attacks in Brussels left 32 people dead and hundreds injured, the Belgian capital remains a city in mourning.

Over the last week, a stream of information has gradually emerged about those who lost their lives in the attacks. They include André Adam, former Belgian ambassador to the United Nations, who was killed in Brussels airport; his wife Danielle remains in a serious condition. Loubna Lafquiri, a young mother of three and teacher at an Islamic school in Brussels who died in the Maelbeek metro attacks; and 27-year-old Lauriane Visart, a Belgian lawyer whose father Michel, a journalist with broadcaster RTBF, spoke movingly about her death.

Through their diversity and individuality, the victims of the Brussels attacks constitute a snapshot of this uniquely international city. But as the capital attempts to return to some form of normality, Brussels is also a city on edge. Despite a series of arrests over the past week, including a dramatic mid-afternoon operation at a tram stop last Friday, at least one suspect believed to have been directly involved in the attacks remains at large.

Fayçal Cheffou, who was arrested by police last Thursday and named by Belgian media as the third bomber, was released on Monday. Prosecutors said there was insufficient evidence to link him with the attacks. Speaking on Belgian TV the following day, his lawyer, Olivier Martins, set out Cheffou’s case, arguing the suspect had phone evidence proving he was not at the airport at that time, and that he was smaller in height than the suspect on CCTV.

Martins also queried the testimony of the taxi driver who allegedly drove the bombers from a Schaerbeek apartment to the airport on the morning of the bombings.

At least one other known individual linked with the Paris attacks – Mohammed Abrini – is still at large. Belgian police issued an international arrest warrant for the 30 year old after he was caught on CCTV footage at a petrol station with Paris suspect Salah Abdeslam last November. Meanwhile, Abdeslam remains in police custody at a high-security prison in Brugges before a court hearing next week.

Nine days after the attacks, huge questions remain about the competence of the Belgian police and security services.

The list of alleged errors and misjudgments is astonishing. According to some reports, residents of a Schaerbeek apartment block – where 30 pounds of the home-made explosive Triacetone triperoxide (TATP) and bomb-making material were found by police last Tuesday – had reported noxious smells emanating from the building.

Senior Belgian cabinet ministers have admitted that authorities failed to act on warnings from Turkey about airport bomber Ibrahim el-Bakraoui. Failures in the communication between different layers of the Belgian police system have been revealed.

The head of police at Mechelen, just north of Brussels, admitted his force failed to pass on crucial information to federal police about the whereabouts of Abdeslam. There have also been criticisms of the fact the metro continued to run an hour after the airport bombings, despite the government deciding to shut down the system at about 8.50am on Tuesday. Metro operator STIB has said it never received the information.

On one level, the decision of the police to release Cheffou could be seen as a healthy sign that legal norms are being upheld. The magistrate said there was simply not enough evidence to convict the suspect.

But as evidence mounts of a number of intelligence mishaps, serious questions have emerged about the structures and administrative systems of the entire Belgian state, which, in a constant battle to balance the needs of the Flemish and Walloon communities, have allowed a vacuum of leadership and responsibility to build up.

Indeed, the fear of upsetting the delicate balance between the different French-speaking and Flemish factions in the multiparty government may be one reason why Michel is reluctant to encourage resignations.

As the country demands answers, it remains to be seen whether the events of March 22nd prompt any real change in the structures of the Belgian state or meaningful admission of political culpability.