Belgian sorrow may turn into anger as suspect remains on run 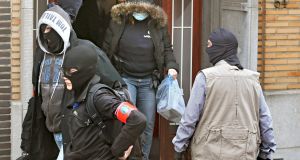 As the citizens of Brussels woke to a new reality yesterday morning, the predominant feeling was one of overwhelming sadness and calm defiance.

Brussels had become the latest European capital to feel the full force of terrorism, after two deadly terror attacks left more than 31 people dead and at least 260 people injured.

But as the stories and identities of the many victims of the March 22nd attacks begin to emerge over the coming days, it is likely that these feelings may turn to anger, as questions begin to be asked about the country’s police service and intelligence system.

The fact that Belgium’s interior minister Jan Jambon warned on Monday that Belgium was on high alert for a possible revenge attack following the arrest of the suspected Paris bomber Salah Abdeslam raised immediate questions as to whether appropriate security measures had been in place.

Worryingly, almost 48 hours after the twin attacks, no one has been charged with the atrocities.

A raid in Schaerbeek on Tuesday night at a house where a taxi driver picked up the suspected attackers yielded nothing in terms of arrests, although a cache of bomb-making materials was found.

Instead police have identified a cell of suspected terrorists who managed to evade police capture despite having lived in Brussels in recent months.

Two key pieces of information have now become clear, however – the men suspected to have carried out the attacks were known to Belgian police: they are also linked to the Paris terrorist attacks four months ago.

Four individuals have been identified by police as suspects in the Brussels attacks, three of whom were captured in security footage at the airport shortly before the airport attacks. One of the three is Brahim el-Bakraoui who detonated a bomb in the airport.

The second suicide bomber, who was caught on camera, was last night identified by Belgian media as Najim Laachraoui, a jihadist linked to the Paris attacks.

The third person in the camera shot is believed to have left an undetonated bomb in the airport, and to be now on the run.

The fourth suspect is Khalid el-Bakraoui, the younger brother of Brahim, who detonated a bomb at Maelbeek metro station on Tuesday.

The Bakraoui brothers were known to police – there is an international arrest warrant out for 27-year old Khalid el-Bakraoui who was jailed in 2011 for car-jacking.

As recently as last week they were named by local media as some of the main suspected terrorists wanted by police in the wake of the Forest raid.

Najim Laachraoui is a known jihadist who has previously travelled to Syria and was stopped on the Austro-Hungarian border last September with Salah Abdeslam.

Evidence is mounting to suggest a link between the Brussels bombers and the Paris atrocities four months ago.

According to reports, Khalid el-Bakraoui had rented the apartment in Forest which was raided by police last week and where Salah Abdeslam had been staying. He is also reported to have rented an apartment in Charleroi where some of the Paris attackers had stayed before the attack. As the web of connections between the Brussels and Paris bombers began to emerge yesterday, questions again turned to the role and competency of the Belgian police service.

In Brussels alone, there are six separate police departments.

As at least one terrorist suspect remains at large in Brussels, the atmosphere of dignified calm that permeated the streets of Brussels yesterday – as people returned to work and the public transport system resumed – was tinged with an unmistakable anxiety.

With the city remaining at the highest possible security level, the pressure will be on police to find answers in the coming days.