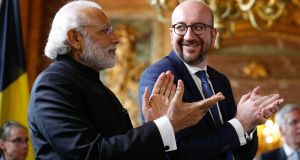 Information relating to the office of Belgian prime minister Charles Michel was found on a laptop belonging to one of the Brussels bombers, Belgian media reported on Wednesday, as the hunt for two suspects directly connected to last week’s terrorist attacks continued.

According to reports in several Belgian newspapers, files containing details of the prime minister’s office in Rue de la Loi in central Brussels were found on a discarded laptop belonging to airport bomber Ibrahim el-Bakraoui. The laptop, which also contained a statement by the 29-year-old suicide bomber written shortly before the attacks, was found near a Schaerbeek apartment raided by police last Tuesday following a tip-off from a taxi-driver who had dropped the three suspects to the airport.

As the search continued for up to two suspects believed to have participated directly in the March 22nd attacks, speculation continued about the identity of the third suicide bomber captured in airport CCTV footage minutes before the attacks. Local media named a 28-year-old Belgian man believed to have links with the Paris attacks as the third unidentified suspect.

Police also believe that a second person may have carried out an attack on a metro train at Maelbeek station in the EU quarter. Ibrahim el-Bakraoui’s younger brother Khalid blew himself up on the rush-hour train.

The Belgian health minister said on Tuesday that 32 people were killed in last week’s twin attacks at the airport and metro station, revising downwards the figure of 35 announced the previous day. The revised figure was due to confusion between two lists of people who had died, a health ministry official said.

Aer Lingus has cancelled all flights between Dublin and Brussels until Saturday at the earliest while Ryanair’s scheduled flights to Brussels airport are being diverted to Charleroi airport, about 60km south of Brussels. There was a heavy security presence at Charleroi airport on Wednesday, with all cars and passengers checked by guards on the roads approaching the airport, leading to long queues.

Charleroi Sud train station was evacuated briefly early on Wednesday afternoon after a suspicious package was found in the station.

Seventeen of the people killed in last week’s attacks were Belgian, and the remaining 15 were foreign nationals, officials said. More than 300 people were injured, about 90 of whom remain in hospital.

Meanwhile, the mayor of Molenbeek on Wednesday moved to ban a planned demonstration by a far-right group that was expected to take place this Saturday in the Brussels district where a number of the Paris attackers lived.

On Sunday, Belgian riot police were forced to deploy water cannons against dozens of far-right protesters who demonstrated at the makeshift shrine to the victims of the terrorist attacks at Place de la Bourse in central Brussels.