Abdeslam refused to blow himself up, brother tells French TV

‘There would have been more victims had I done it. I couldn’t go through with it’

The neighbour of the Abdeslam brothers, one of whom blew himself up in Paris on Friday night and the other who is on the run as Europe's most wanted man, talks about the suspects of the Paris attacks. Video: Reuters 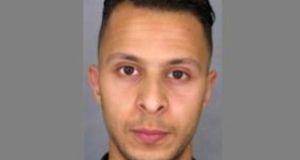 Salah Abdeslam has been been held in a high-security jail since his dramatic arrest at a Brussels flat on Friday. AFP/Getty Images

Salah Abdeslam, the chief suspect in the Paris bomb attacks of November who was arrested in Brussels last month, refused to blow himself up on the day of the attacks, his brother Mohamed told French news channel BFM TV.

Abdeslam, who will be extradited to France, has renewed an offer to cooperate with French authorities investigating the November 13th attacks that killed 130 people, his lawyer said this week.

“There would have been more victims had I done it,” Salah Abdeslam told his brother. “Luckily, I couldn’t go through with it.”

The 26-year-old Belgian has been detained in a high-security prison in Bruges since his arrest in the Brussels suburb of Molenbeek two weeks ago. As well as his suspected involvement in the Paris terrorist attacks four months ago, he is also believed to be linked to the March 22nd bombings in Brussels airport and Maalbeek metro station which left 32 people dead. Last week Abdeslam dropped his initial objection to the extradition.

Investigators believe the attacks in Paris and Brussels were carried out by militants from the same Islamic State network.

A Belgian court decided on Thursday that Abdeslam could be extradited to France, Belgium’s federal prosecutors said.

A lawyer for Abdeslam said earlier that Abdeslam had dropped his initial objection to being extradited and had also renewed an offer to cooperate with French authorities investigating the November 13th attacks that killed 130 people.

Prosecutors said France and Belgium would now discuss how to proceed with the transfer, which the French Justice Ministry said should take place within the next 10 days.

Investigators believe the attacks in Paris and Brussels were carried out by militants from the same Islamic State network.