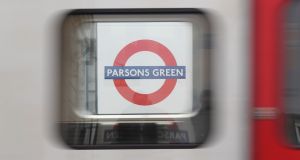 British police said they had arrested two more men in connection with the bombing of a commuter train in London last week which injured 30 people.

The latest arrests bring to five the number of people in custody in connection with Friday’s Tube attack in Parsons Green.

The men, aged 48 and 30, were held under terrorism laws in Newport in south Wales.

Another man, aged 25, was arrested in Newport on Tuesday night while two others, an 18-year-old and a 21-year-old, were held by counter-terrorism officers on Saturday.

Thirty people were injured after a homemade device exploded on a London Underground train at Parsons Green station during rush hour on Friday.

“This continues to be a fast-moving investigation. A significant amount of activity has taken place since the attack on Friday,” said Dean Haydon, head of the Metropolitan Police’s Counter Terrorism Command.

The bomb went off on Friday during the morning rush hour on a packed train at Parsons Green underground station, engulfing the carriage in flames.

A total of 36 people have been killed in Britain this year in militant attacks.