Striking workers cause chaos in São Paulo ahead of World Cup 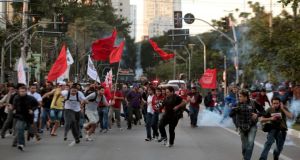 People run away from tear gas fired by police during the fifth day of metro workers’ protest in Sao Paulo. Photograph: Reuters

Less than four days before it hosts the opening game of the World Cup, São Paulo became the scene of protests, street fires and tear gas yesterday as striking subway workers brought chaos to the city.

The strike – which disrupted half the metro stations and worsened traffic in South America’s most populous city – was the latest headache for organisers, as national teams from the United States, Spain and Argentina flew in for the start of the tournament on Thursday.

Security is also a major concern, particularly in Rio de Janeiro – the base of the England team – following a recent flare- up of unrest in the city’s slums or favelas.

Excitement about the tournament is steadily building among the public – evident in the growing number of flags in windows and bunting on the streets – but many Brazilians are still uneasy about the $11 billion cost of hosting the tournament and associate the World Cup with corruption, inefficiency, evictions and misplaced priorities.

Opponents have launched anti-Fifa campaigns on social networks; trade unions have timed strikes ahead of the tournament; and activists have mounted a series of protests in city centres and close to the 12 World Cup stadiums – several of which are still the focus of frantic last-minute construction work.

Although the demonstrations are far smaller than last June’s protests of more than a million people, they continue to rattle the government.

The Brazilian president, Dilma Rousseff, who faces re-election in October, has declared security to be a priority, suggesting unnamed forces are conspiring against her.

Subway workers in São Paulo are in the fifth day of a strike for a 12 per cent wage hike. Station closures forced commuters on to the road and led to 125 miles of traffic jams last week - the worst congestion of the year.

Their protest has been supported by activists from the Landless Workers’ Movement, who blocked roads and occupied a station in the centre of the city until they were dispersed by riot police using percussion grenades.

The union president, Altino Melo dos Prazeres, said the tough response from the authorities could lead to a further escalation.

“If the beating continues, we are going to talk to all the sectors. If our people bleed, we are going to ask for help from the metalworkers, from the bank workers, and have a day of general strike at the opening of the cup,” he told reporters.

The industrial action follows a march last week by about 10,000 activists on the Arena Corinthians, which will host the opening match between Brazil and Croatia.

Earlier in the month, indigenous protesters in the capital, Brasilia, fired arrows at police during a standoff over land rights.

The Brazilian team has also come under pressure. In May, the players’ bus was attacked by demonstrators and last week, the team was booed by sections of the crowd during a drab warm-up game against Serbia. – (Guardian service)