Ryanair has been warned to deliver 'action, not words' by British aviation authorities after it failed to inform 400,000 customers of their full rights regarding cancelled flights. Video: Reuters 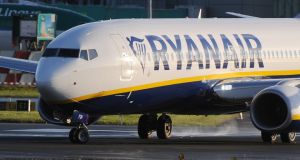 Ryanair has agreed to implement measures to ensure all passengers affected by recent flight cancellations are “fully aware” of their “rights and entitlements”.

This includes passengers receiving full refunds or being booked onto alternative Ryanair flights or “other comparable transport options”, with reimbursement of “reasonable out-of-pocket expenses”.

The airline made the statement this afternoon after meeting the Commission for Aviation Regulation in the Republic.

The UK’s Civil Aviation Authority has accused the Irish airline of “not complying with the law” over its handling of the fiasco. It imposed a deadline of 5pm on Friday for the airline to update its information on compensation to passengers.

Ryanair has agreed to implement a series of steps to address the CAR’s requirements to ensure that all customers affected by Ryanair’s rostering related flight cancellations are fully aware of the EU rules governing air passengers rights - known as EU261.

These entitlements include full refunds where requested, or re-accommodation onto other Ryanair flights or other comparable transport options with reimbursement of reasonable out-of-pocket expenses.

After meeting CAR, Ryanair issued a clarification email to all affected customers outlining their rights to refunds, including being re-routed on another Ryanair flight or completing their journey with other comparable transport options and expenses.

Fly with another airline

It also issued a press release explaining to customers how and when they will be re-accommodated on other Ryanair flights or flights with other airlines.

This press release will be displayed on the home page of Ryanair’s website from Friday.

The airline has also updated the FAQ pages of its website to reflect all of these changes.

Ryanair has also replied to the a letter sent by the UK’s Civil Aviation Authority on Thursday agreeing to meet its requirement for customer clarification on Ryanair’s EU261 obligations, which are in line with those requested by the CAR.

“Ryanair has called upon the UK CAA to now require UK airlines to comply with these EU261 obligations which the CAA did not apply to British Airways in May this year, when a computer meltdown stranded hundreds of thousands of British citizens/visitors at London Heathrow and many other airports, with no apparent action taken by the CAA in respect of re-accommodation or enforcement against British Airways,” the company said in a statement.

Earlier this week the CAA instructed the budget airline to tell passengers they were entitled to be re-routed by another carrier if their flight is one of those cancelled by Ryanair and explain how this re-routing will work.

It also demanded the airline publicly state it will reimburse expenses for affected customers.

The CAA also told Ryanair it would have to commit to helping passengers who chose an unsuitable option as a result of being misled.

In a letter sent on by the CAA on Wednesday, its chief executive Andrew Haines accused Ryanair of “persistently misleading passengers with inaccurate information regarding their rights”.

In particular, he said emails alerting passengers about cancellations did not point out the right to a flight on another airline, if that was the best solution.

Ryanair had responded by saying it was “meeting with the CAA and will comply fully with whatever requirements they ask us to”.

After which Mr Haines wrote to the airline again giving it a deadline of by 5pm on Friday to issue a statement clarifying its rebooking policy and committing to helping passengers who chose an unsuitable option because they were not in possession of the full facts as well as refunding out-of-pocket expenses of those hit by the cancellations.

The CAA also said that by 5pm on Monday Ryanair would have to give it the text of an email to be sent to the hundreds of thousands of ticket holders affected by cancelled flights to or from the UK.

Its letter said the email would have to include “accurate and comprehensive information on their rights and options” and allow passengers who had already chosen a refund to change their mind and be booked on flights operated by alternate carriers.

The airline will cancel 22 Dublin flights a week from November 1st until March 24th, a period of 21 weeks.

This amounts to the withdrawal of some 87,000 seats and comes on top of the 319,000 the airline cancelled two weeks ago covering the six weeks to the end of October.

A Ryanair internal memo allegedly instructed call centre staff to offer flights with other carriers - provided the price “does not exceed three times the value of the original Ryanair fare”.

It was criticised by consumer group Which? whose managing director Alex Neill said: “Ryanair appears to be plucking figures out of thin air as there is no legal basis for the arbitrary figure they’ve set. The law says passengers must be rerouted and there’s no specified limit on cost. This yet again highlights the importance of the action which the Civil Aviation Authority has started.

The Commission for Aviation Regulation is the enforcement body in the Republic, for air passenger rights and it welcomed the steps taken on Friday by Ryanair.

A spokesman said that since Ryanair’s first announcement of flight cancellations two weeks ago, it had engaged with the airline to ensure information was quickly provided on details of each flight that was cancelled in the first wave of cancellations and that affected passengers were contacted about refunding, rerouting, care and assistance and their right to compensation.

In relation to the second wave of cancellations it engaged with Ryanair to publish a list of affected Irish flights, which it did on Thursday. “We have also, today, secured agreement from Ryanair that it will comply with the regulations and directly provide affected customers with the necessary information on refunds, rerouting, care and assistance and compensation,” a spokesman said.

He added that Ryanair had confirmed taken on additional staff to ensure that all refunds are provided to affected passengers within seven working days and that they will deal with all claims for expenses and compensation within 28 working days.

“Ryanair has an obligation to re-route passengers to their final destination at the earliest opportunity. We fully expect Ryanair to offer re-routing on alternative airlines or to alternative airports as appropriate (as they have outlined they will do). If re-routing means you have to stay an extra night, Ryanair must provide care and assistance at its expense; for example, hotel accommodation, meals and refreshments and transport to the hotel,” the spokesman said.

Hancock warns of second lockdown in Britain if public ignores Covid-19 rules 06:34
Thousands march in Bangkok in weekend of pro-democracy protests 20:40
US declares all international sanctions against Iran restored 20:12
Belarusian police have personal details leaked by hackers 18:01
Trump gives blessing to deal to allow TikTok to continue to operate in US 18:00

1 Healthy one day, ventilated the next – a Covid-19 survivor’s story
2 Gardaí break up rave attended by 60 people at Dublin flat complex
3 The FinCEN files: The billion dollar a month money trail
4 Covid-19: HSE agrees deal with German lab to boost testing capacity
5 Overseas aid during Covid: ‘This virus cannot be dealt with in isolation’
Real news has value SUBSCRIBE