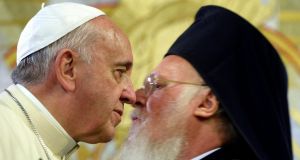 Pope Francis and Ecumenical Patriarch Bartholomew I embrace after signing a joint statement at the Church of St George, the principal Greek Orthodox cathedral, in Istanbul. Photograph: Filippo Monteforte/Epa

Pope Francis condemned “Islamophobia” while at the same time calling on intellectuals, politicians and religious leaders to denounce all fundamentalist terrorism. He was speaking last night at the end of his historic three-day visit to Turkey at his now habitual post-visit press conference on the papal plane.

Reflecting on three momentous days which saw him meet with Turkish president Recep Tayyip Erdogan as well as with Islamic clerics and Orthodox churchmen, the Pope also indicated that he would in future like to visit Iraq and also meet with Russian Orthodox Patriarch, Kirill.

He began, however, by condemning anti-Islamic prejudice: “Faced with these (fundamentalist Islamic) terrorist acts . . . people react badly, saying if this is Islam, then I will get angry. That way, lots of Muslims feel offended and they have to point out, ‘but that is not us, the Koran is a prophetic book of peace, this (terrorism) has nothing to do with Islam’.

“And I can understand them. I totally believe that you cannot call all Muslims terrorists any more than you can call all Christians fundamentalists . . . I said to president Erdogan that it would be a good thing to speak out against all of them, that is something that academics, intellectuals, religious leaders and politicians should all do. We also need the Islamic world to speak out, to say, ‘No, this has nothing to with the Koran’.”

The Pope also said that in the contemporary world, particularly in the Middle East, one could also talk of “Christianophobia” saying: “I don’t want to tone it down because the reality is that we Christians are being chased out of the Middle East.”

The Pope went on to say that he had been encouraged by his meetings with Islamic authorities in Turkey, both at the Diyanet, the Turkish state department for religious affairs, and at the Blue Mosque on Saturday morning.

During the latter visit, the Pope had appeared to pause for a moment of common prayer with the Grand Mufti of Istanbul, Rahmi Yaran. The Holy See had been keen to suggest that this had been more a moment of “spiritual adoration” than of prayer but, in his usual frank way, Francis dismissed the mandarins, calling a “prayer”, a “prayer” and saying: “I came to Turkey, not as a tourist but rather as a pilgrim, in particular I came for today’s (Orthodox) celebration of the Feast of St Andrew, alongside Patriarch Bartholomew. In the Blue Mosque, I couldn’t pretend to be a tourist. I saw that wonderful place and the Mufti was explaining it all to me, citing those bits of the Koran which speak about John the Baptist and Mary. And at that moment, I felt the need to pray.

“So I asked him, shall we say a prayer and he replied, ‘Yes, yes’. I prayed for Turkey, for peace, for the Mufti, for everybody and for myself and then I said, ‘Oh Lord, end all these wars. It was a moment of sincere prayer’.”

The Pope also spoke of the main reason for his visit to Turkey, namely to attend the St Andrew’s celebration alongside the Ecumenical Patriarch of Constantinople, Bartholomew 1. The Orthodox and Catholic churches, he said, are “walking down the road together” notwithstanding the worst efforts of theologians.

If we wait for theologians to come to an agreement, he said, the day of unity will never come, adding: “There is spiritual ecumenism and there is the ecumenism of blood. When these people (terrorists) kill Christians, the blood is all mixed up. Our martyrs shout out to us, we are all one.”

Pope Francis acknowledged that not everyone in both the Catholic and Orthodox camps welcomes the strong impulse towards unity but he pointed to the ridiculous reality that the two churches today cannot agree on the Easter dates, saying: “Since Paul VI’s day they have been arguing about the correct Easter date. At this rate, my grandnephews will be celebrating Easter Sunday in the middle of August. I remember one time walking along Via della Scrofa in Rome with an Orthodox priest and he said to me, ‘My Christ will rise again in a month’s time, when does your Christ rise again? My Christ, your Christ! That’s a problem.”

Concluding his press conference, the Pope indicated that he would like to visit Iraq, as well as travel to Moscow to meet Russian Patriarch Kirill. Both visits, however, entail a variety of logistical problems that have not yet been resolved, he said.

In reference to his host country, Turkey, the Pope once again praised the generosity of the Turkish people who have taken in two million mainly Syrian and Iraqi refugees in the past three years. Francis also praised president Erdogan’s attempt to extend an olive branch to the Armenian people by writing a letter on the anniversary of the 1915 Armenian genocide by Ottoman troops. To reach out your hand like that may not go far enough, but it is always positive, he said.