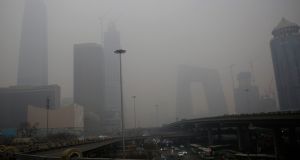 Buildings in Beijing, China, shrouded in smog: China faces a huge air quality crisis, brought on largely by coal-burning, which makes it far more willing to wean itself from the worst form of fossil fuel consumption. Photograph: How Hwee Young/EPA

Did the Paris climate accord save civilisation? Maybe. That may not sound like a ringing endorsement, but it’s actually the best climate news we’ve had in a very long time.

This agreement could still follow the path of the 1997 Kyoto Protocol, which seemed like a big deal but ended up being completely ineffectual. But there have been important changes in the world since then which may finally have created the preconditions for action on global warming before it’s too late.

Until very recently there were two huge roadblocks in the way of any kind of global deal on climate: China’s soaring consumption of coal and the implacable opposition of the Republican Party in the United States. The first seemed to mean global greenhouse emissions would rise inexorably no matter what wealthy countries did, while the second meant the biggest of those wealthy countries was unable to make credible promises, and hence unable to lead.

But there have been important changes on both fronts.

On one side there is a visible shift in Chinese attitudes – or at any rate, a shift that would be visible if the smog was not so thick. Seriously, China faces a huge air-quality crisis, brought on largely by coal-burning, which makes it far more willing to wean itself from the worst form of fossil- fuel consumption.

So China is playing a very different role now than it did in the past. One indicator: some of the usual suspects on the American right have suddenly changed their line. They used to argue that US emission limits would be useless, because China would just keep polluting; now they’re starting to argue that US action isn’t necessary, because China will cut coal consumption whatever we do.

Which brings us to the US. Republican attitudes haven’t changed, except for the worse: the Republican Party is spiralling ever deeper into a black hole of denial and anti-science conspiracy theorising. The game-changing news is that this may not matter as much as we thought.

It’s true that the US can’t take broad-based action on climate without new legislation, and that won’t happen as long as Republicans retain a lock on the House of Representatives. But President Barack Obama has moved to limit emissions from power plants – a big part of the solution we need – through executive action. And this move has already had the effect of restoring US climate credibility abroad, letting Obama take a leading role in Paris.

Still, what reason is there to believe the accord will really change the world’s trajectory? Nations have agreed both to emission targets and to regular review of their success or failure in meeting those targets, but there are no penalties other than censure for countries that fail to deliver.

And achieving those emission targets would definitely hurt some powerful special interests, since it would mean leaving most of the world’s remaining fossil fuels in the ground, never to be burned.

So what will stop the fossil-fuel industry from buying enough politicians to turn the agreement into a dead letter?

The answer, I’d suggest, is that new technology has fundamentally changed the rules.

Many people still seem to believe that renewable energy is hippy-dippy stuff, not a serious part of our future. Either that or they have bought into propaganda that portrays it as some kind of liberal boondoggle. The reality, however, is that costs of solar and wind power have fallen dramatically, to the point where they are close to competitive with fossil fuels even without special incentives – and progress on energy storage has made their prospects even better. Renewable energy has also become a big employer, much bigger these days than the coal industry.

Of course, it could go all wrong. President Ted Cruz or President Marco Rubio might scuttle the whole deal and by the time we get another chance to do something about climate it could be too late.

But it doesn’t have to happen. I don’t think it’s naive to suggest that what came out of Paris gives us real reason to hope in an area where hope has been all too scarce. Maybe we’re not doomed after all.

Your Comments
Sign In Sign Out
We reserve the right to remove any content at any time from this Community, including without limitation if it violates the Community Standards. We ask that you report content that you in good faith believe violates the above rules by clicking the Flag link next to the offending comment or by filling out this form. New comments are only accepted for 3 days from the date of publication.
Paul Krugman: Paris climate accord brings hope