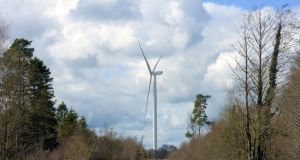 Eddie O’Connor says the Government should play a leading role in Europe to push for renewable energy, such as power derived from wind and solar

Eddie O’Connor, the wind energy entrepreneur, has warned the Government against taking a “sleeveen approach” on emissions targets, after the Taoiseach Enda Kenny complained at the COP21 global summit on climate change in Paris about “unrealistic” targets for Irish agriculture.

Mr Kenny had suggested at the conference that he supported legally binding emissions targets, but said some EU 2020 agriculture targets were “unreachable” because of a “lost decade” of economic malaise in this country.

“There is no excuse. You can’t opt out of global warming. There may be an issue with agriculture, but it is going to have to get dealt with,” said Mr O’Connor.

He reiterated his call for a single European electricity market and a highly interconnected European “super-grid”, where excess power derived from renewables could flow across borders to meet demand.

“Nationalism is holding it up. Across Europe, you have monopolies in control of the grids,” he said.

“Politicians and their advisers here haven’t thought it out. Yes, a small country like Ireland can only do so much, but this country can influence European policy when it wants to.”

Mr O’Connor insisted that renewables are “the cheapest form of electricity on the planet” and dismissed recent criticisms by some leading economists in Ireland that there is a bubble in the sector, and it is over-subsidised.

He said an ambitious agreement at COP21 could also have a big impact on climate change.

“Any agreement this time will have two major things going for it.

“Firstly, the costs of solar and wind energy have come down hugely.

“Secondly, China is now taking a huge leadership role in tackling emissions. Both of those are game changers.”

Meanwhile, Mr O’Connor said MRP would probably float on the stock exchange in 2018. It would most likely be in New York and also possibly in the UK.

He said the company, which in a joint venture with Actis, recently won a $600 million State windfarms contract in Chile.

It will also also announce several funding initiatives in the coming months.