Kenny on ‘wrong side of history’ over global summit remarks 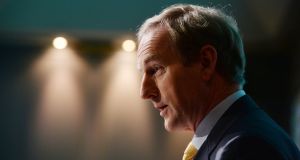 Taoiseach Enda Kenny was accused of waffle over his remarks at the COP21 summit. Alan Betson/The Irish Times

Taoiseach Enda Kenny has been accused of “speaking out of both sides” of his mouth and being “on the wrong side of history” when addressing the global summit on climate change in Paris on Monday.

There has been widespread criticism from political opponents of his comments on the EU setting “unrealistic” emissions targets for agriculture units.

Fianna Fáil environment spokesman Barry Cowen said on Tuesday that Mr Kenny was saying one thing to an international audience where he promised Ireland would make a determined contribution.

He said Mr Kenny immediately said something different to a domestic audience, seeking an exception for agriculture.

Mr Cowen said he disagreed with An Taisce’s John Gibbons who said Irish farmers should discontinue producing beef, which is heavily subsidised, and focus instead on afforestation.

“If Mr Kenny has suggestions for the food industry section that can be measured as a commitment in that area, he should bring it to the Dáil and we will meet him head on and agree something,” he said.

Like Mr Cowen, though, he would not spell out if particular cuts were for agriculture. “The beef and dairy sectors are important and must be protected, but an overreliance on these leaves us vulnerable in terms of meeting our international commitments to reduce greenhouse gas emissions,” he said.

Green Party leader Eamon Ryan displayed no such reluctance and accused the Taoiseach of embarrassing the country with special pleading on climate change, and said his comments had firmly placed Ireland on the wrong side of history.

“The Taoiseach likes to portray a ‘can do’ attitude, but yesterday he used his big moment on the world stage to place Ireland firmly in the ‘won’t do’ camp. He was unable to grasp the bigger picture on climate change, as outlined by presidents Hollande and Obama, that multilateral co-operation on climate is the best response to the various threats we face. There can be no ‘special case’ argument,” said Mr Ryan.

He rejected the Taoiseach’s argument that there had been a “lost decade” of recession as untrue.

“It beggars belief that the Taoiseach was arguing yesterday that we would have to wait before we get wealthier. The vast majority of poorer countries must think we have a frightful cheek.”

Oisín Coghlan of Friends of the Earth was also highly critical. He said: “Beyond the opening aspirations the Taoiseach’s speech offered fudge and dodge rather than firm action to make those aspirations a reality.

“He devoted a chunk of his speech to trying to dodge pollution targets that would place any future limit on the agri-industry’s voracious expansion plans.

“And on climate finance what sounded like an increase was actually a fudge. The €175 million promised over the next five years is no more than existing Irish Aid spending repeated into the future.”

Mr Gibbons accused Mr Kenny of waffle saying carbon foot-printing was no good when emissions were increasing because of green house gases.