US condemns killing of Palestinian teenager in Jerusalem 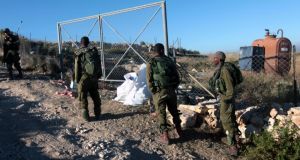 Israeli soldiers patrol in the hills in the West bank village of Halhoul, north of Hebron, yesterday near the place where the bodies of the three kidnapped Israeli teens were found. Photograph: Abed Al Hashlamoun/EPA

The White House today condemned the killing of a Palestinian teenager whose body was found on the outskirts of Jerusalem and urged authorities to take steps to prevent tensions from escalating.

“We call upon the government of Israel and the Palestinian Authority to take all necessary steps to prevent an atmosphere of revenge and retribution.”

The death of the Palestinian raised suspicions he had been killed by Israelis avenging the deaths of three abducted Jewish teens.

The incident occurred the day after Israel buried three teenagers who had been kidnapped near a Jewish settlement on June 12th and whose bodies were found in the West Bank yesterday.

Palestinian residents told a Reuters photographer that they saw a teenager forced into a vehicle outside a supermarket in the Shoafat section of Jerusalem today.

Micky Rosenfeld, a spokesman for Israeli police, said police had been notified of a youth “pulled into a vehicle and possibly kidnapped” and roadblocks were set up in search of suspects.

Later “police discovered a body in the Jerusalem forest and were looking to see if there was a connection between the missing youth and the body that was found,” Rosenfeld said.

A security source speaking on condition of anonymity said Israel suspected the youth had been kidnapped and killed, possibly in retribution for the killings of the Israeli teens.

Israel’s Ynet web site said the body was that of an Arab, that it was charred and showed signs of violence.

Dozens of Israelis had protested in Jerusalem on Tuesday night against the kidnap and killing of the Israeli teens, and there were reports some had shouted “death to the Arabs” at one of these demonstrations.

Israel has blamed Hamas Islamists for the kidnappings.

The group had praised the abductions but not claimed responsibility.