Imagine as many people as live in Dublin suddenly arriving in Ireland, seeking food and shelter. That’s what has happened in Lebanon, as neighbouring Syria implodes

Before he left the war-ravaged Syrian city of Aleppo, more than three months ago, Malak Moaws owned two houses and drove a relatively new car. He now lives in a tent in the Minnieh refugee camp, in northern Lebanon. Video: Unicef 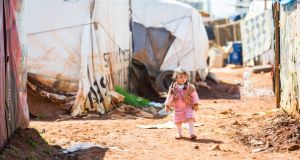 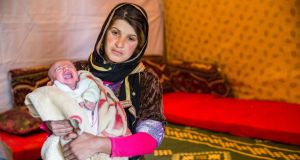 Refugees: a young Syrian mother with her month-old daughter, who was born in Lebanon. Photograph: Naoise Culhane 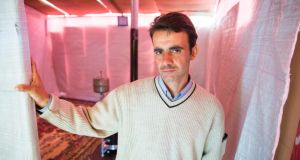 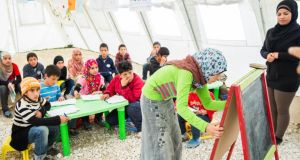 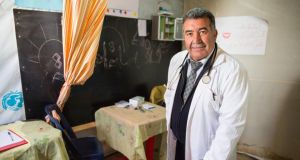 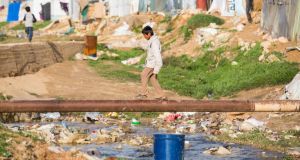 Refugees: a boy crosses a pipe outside the tent settlement in Bekaa. Photograph: Naoise Culhane

Before he left the war-ravaged Syrian city of Aleppo, more than three months ago, Malak Moaws owned two houses and drove a relatively new car. Life was good, and, whenever the computer engineer could, he and his family spent weekends in the country, inviting friends and family along to share their modest prosperity.

When the Syrian military dropped improvised barrel bombs on his neighbourhood in January, they devastated Moaws’s home, scorched his life savings and, he says, destroyed the most precious thing he has: his children’s future.

“My children are alive, but their lives have been stolen,” he says outside the entrance to the tent that is now his home, in the Minnieh refugee camp, near Tripoli in northern Lebanon (not to be confused with the Libyan capital).

He points to a stream of polluted water that runs past his temporary shelter, over which he built a makeshift bridge to stop his children from falling in. His youngest child was born here, in this tented estate, shortly after Moaws and his family arrived from Aleppo.

He saw both his brothers killed and describes seeing snipers target women in the streets. Some refugees say snipers in Syria were deliberately shooting children in the back, leaving them alive but paralysed. Such is the level of debased humanity to which the fight for a fragmented Syria has plunged.

Depending on which statistics you rely on, one in every third or fourth person living in Lebanon is now a Syrian refugee. Like Moaws, they are living in the 500 or so unofficial camps that are dotted mainly along the Syrian border. Many of them have no clean water, electricity or permanent structures to live in.


Fourth year of conflict
The political crisis in Syria, now also a humanitarian crisis, is threatening to spill into a regional conflict, with large numbers of pro- and anti-government factions decamping to neighbouring countries as the conflict enters its fourth year.

The number of refugees increases weekly. With Lebanon operating an open-border policy for the most part, it’s akin to as many people as live in Dublin suddenly arriving in Ireland in desperate need of food, shelter and security.

Frontline aid workers feel overwhelmed. The informal camps in Lebanon are numerous and widely dispersed, making it difficult to keep track of who needs what.

Malnutrition is a problem in areas such as the Bekaa Valley, where children are arriving healthy but deteriorating quickly. Some families are afraid to visit public-health centres, in case they are sent back to Syria. A generation of children are being sent out to work to help support families where the fathers are still fighting or have been killed.

Some children have not been to school for more than three years, so in some Lebanese schools a second teaching shift has been set up, between 2.30pm and 7pm, to help educate refugees. Twelve thousand children are being educated in these classes; their teachers find they are traumatised and often require intensive counselling.

At a school in Minnieh, one teacher says, “Yesterday it was raining. All the children are afraid of the noise of the raindrops. They remember that Assad’s troops bombed their houses. I told them it’s not a war here. It is just rain.”

Lebanese farmers who rent land to refugees are reluctant to install water, electricity or other infrastructure, as they don’t want the refugees to remain long-term. At the Faida refugee camp, where more than 3,000 people are living in the most basic conditions, a medical team struggles to vaccinate every child who arrives from Syria.


“Disease is huge”
Dr Zein Saad of the local ministry of health says, “We have a lot of medical problems. The main ones are scabies and head lice, and there are a lot of upper-respiratory infections and gastrointestinal problems. We saw about 2,000 cases of malnutrition. I am annoyed at this situation. The problem is very huge. The numbers of people are very huge. Disease is very huge. Everything is a problem.”

As agencies struggle to cope, there are worrying signs that geopolitical tensions are worsening in Lebanon because of the influx of refugees and the ongoing conflict. During our time in the country, more than a dozen people were killed in fighting in Tripoli, and car bombs were detonated in suburbs of Beirut.

How can a country such as Lebanon, which acts as a sponge for conflicts in the region, sustain the estimated 3,000 refugees who cross into its territory from Syria each week?

There’s no clear answer. Refugees I meet hold out little hope of being able to return home within the next five years, and many are preparing for a long-term resettlement.

Peter Power of Unicef Ireland says that the agency, like others, is doing its best to get aid to those most in need but that, with the international community concentrating on Crimea, some feel the focus has shifted. The standoff in Crimea may also make it harder to get consensus on action in Syria as old cold-war battle lines are redrawn.

“We are facing the worst humanitarian crisis here since the second World War,” Power says. “I’ve seen at least a doubling in the number of refugees since I was last there, a year ago, and the conditions are much worse than before. There’s very little hope.”