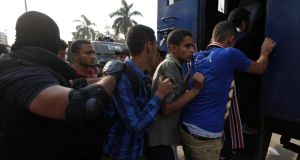 The arrest yesterday by Egyptian security forces of Essam el-Erian completed the round-up of the most senior Muslim Brotherhood leaders.

Mr Erian, a former member of the movement’s supreme guidance council and vice-chairman of its political wing, the Freedom and Justice Party, had been in hiding since the July ousting of president Mohamed Morsi and the subsequent detention of movement figures and supporters.

At least 1,000 people have died in clashes between the security forces and supporters of Mr Morsi, a leading Brotherhood member, since his removal from office by the army.

Communications centre
Police were tipped off to Mr Erian’s presence at a suburban apartment in the New Cairo area, from where he issued messages urging supporters to continue demonstrations denouncing the overthrow of Mr Morsi and demanding his reinstatement.

A moderate who became a hardliner, Mr Erian has been charged with “inciting violence” and “aiding criminal acts”.

Some 2,000 high- and middle-ranking Brotherhood figures and up to 6,000 rank and-file members and backers have been jailed in the crackdown that intensified in August following the forcible dispersal of pro-Morsi sit-ins in Cairo.

With the Brotherhood’s top leaders either in prison or in hiding, lower-level figures have struggled to sustain protests that have raised tensions and prevented a return to normal life for many Egyptians.

Shortly after Mr Erian’s capture, security forces entered the main building of al-Azhar University in Cairo where demonstrating students had stormed and thrashed the offices of the university’s senior administrator and held the rector captive. Al-Azhar, Egypt’s most prestigious religious university, has been in turmoil for weeks due to pro-Brotherhood student strikes and demonstrations.

In an earlier development, three judges refused to preside over the trial of three dozen Brotherhood members, including spiritual mentor Mohamed Badie and strongman Khairat el-Shater, after the accused were barred from the proceedings. The judges said they had withdrawn “for reasons of conscience”.

On November 4th, Mr Morsi and 14 other Brotherhood leaders are due to go on trial, accused of orchestrating a December 2012 attack outside the presidential palace against thousands protesting his appropriation of powers beyond judicial review. At least 10 people were killed and scores wounded. Mr Morsi has rejected the authority of the court to try him, and his legal team will attend the proceedings to observe but not to defend him.

Fatal shooting
The trial of Mr Badie and other senior figures began in August. They are charged with incitement in connection with the June 30th fatal shooting of eight anti-Brotherhood demonstrators who were trying to storm the movement’s headquarters in Cairo.

Ahram Online has reported a source in Prime Minister Hazem el-Beblawi’s cabinet as saying its priority is to restore security to Egypt by “controlling the Muslim Brotherhood and limiting [its] capacities” rather than pursuing reconciliation and inclusiveness. An overwhelming majority of Egyptians support this policy as they accuse the Brotherhood of dictatorial behaviour and mismanagement during Mr Morsi’s year in power.