Palestinians care as much about their children as we do 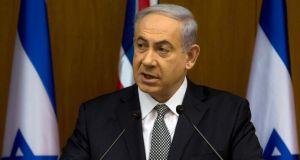 ‘Israeli Prime Minister Binyamin Netanyahu had made the same point in a CNN interview seven days earlier. “All civilian casualties are unintended by us but actually intended by Hamas. They want to pile up as many civilian dead as they can . . .They use telegenically-dead Palestinians for their cause. They want the more dead the better’.” Photograph: Sebastian Scheiner/AP

A columnist in an Irish newspaper last Sunday offered an answer to a question from by Channel 4’s Jon Snow – “Why doesn’t the US buy a similar dome for Gaza?” Snow had just returned from a reporting stint in the region. He spoke passionately and in distress of the maimed and dead children he had encountered in Gaza’s shattered hospitals.

Israel has its “Iron Dome” supplied by the US, a system capable of tracking and destroying incoming Hamas rockets. Some rockets get through, putting innocent civilians, including children, at deadly risk. Gaza has no equivalent of the dome to protest its children. There has been a handful of civilian casualties in Israel. Palestinian children have been dying in droves. Hence Snow’s question.

The columnist answered: “Well, I suspect that wouldn’t suit the PR battle Hamas is currently waging – and winning. Even if they are committing war crimes by hiding arms and terrorists in schools and hospitals, they know the liberal West will still blame Israel for all deaths. Every dead body is a win for Hamas.”

“All civilian casualties are unintended by us but actually intended by Hamas. They want to pile up as many civilian dead as they can,” he said.

“They use telegenically dead Palestinians for their cause. They want the more dead the better.’’

There’s nothing original about this. The same was said by the French in Algeria and of the Kikuyu during Britain’s war against Keyna’s Land and Freedom Army. The US commander in Vietnam, Gen William Westmoreland, when asked how he could justify the killing of hundreds of thousands of Vietnamese, including many civilians, responded: “The oriental doesn’t put the same high price on life as does a westerner . . . We value life and human dignity. They don’t care about life and human dignity.”

The idea of the Palestinians deliberately bringing death on themselves and their families for propaganda purposes had been suggested by US Republican Party pollster Frank Luntz in a 116-page booklet written five years ago following the second-last Israeli assault on Gaza.

The report, Global Language Dictionary, had been commissioned by a US lobby group, the Israel Project, and has since become the bible, so to speak, of Israeli spokespersons dealing with international media.

The pronouncements of Netanyahu spokesman Mark Regev follow the Luntz script so closely the pollster’s words might be scrolling down his autocue.

Persuading intelligent, decent people that there are Palestinians who couldn’t care less about their children being crushed to death in the rubble of a bomb blast is quite an achievement.

I met Rafeef Ziadah last year. We spent a pleasant day in a pub and then went to a poetry session. She is from Palestine. Here’s a snippet from one of the works she recited:

“I vent out words and smile not exotic. Smile, not terrorist, and I recount, I recount a hundred dead, 200 dead, 1,000 dead. Is anyone out there? Will anyone listen?

“I wish I could wail over their bodies. I wish I could just run barefoot in every refugee camp and hold every child, cover their ears so they wouldn’t have to hear the sound of bombing for the rest of their life the way I do . . .