Italy demands justice from Egypt over killing of Giulio Regeni 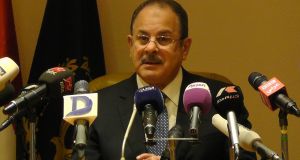 Italy demanded on Monday that Egypt catch and punish those responsible for the death of a student found tortured by a roadside in Cairo, and the Egyptian government dismissed suggestions its security services could have been involved.

The incident has strained ties between Rome and Cairo, which has made no arrests so far.

“We want the real perpetrators to be discovered and punished according to the law,” Italian foreign minister Paolo Gentiloni told La Repubblica newspaper on Monday. He said Italy “will not be satisfied with suppositions” to explain the death.

The discovery of Mr Regeni’s body, beaten and burnt with cigarettes, prompted insinuations by some journalists and social media users that he had suffered police brutality.

La Repubblica compared his injuries to those security services would inflict on a spy.

“This is jumping to conclusions without any evidence ... This has bothered and depressed us greatly, that such things are being said of the Egyptian security apparatus,” he said.

Rights groups say police often detain Egyptians on scant evidence and that they are beaten or coerced. Scores have disappeared since 2013, the groups say. Egypt denies allegations of police brutality.

Asked whether it could have been apolitical, the result of a mugging or kidnapping gone wrong, he said: “We can’t tell for sure, we are still investigating his relationships.”

An initial autopsy in Egypt showed Mr Regeni had been hit on the back of the head with a sharp instrument, according to a senior official at the Cairo public prosecutor’s office and a forensic doctor. Both spoke on condition of anonymity.

A second autopsy in Italy “confronted us with something inhuman, something animal”, interior minister Angelino Alfano told Sky News 24 television on Sunday.

“It was like a punch in the stomach and we haven’t quite got our breath back yet.”

Italian media reports that the second autopsy showed Mr Regeni’s neck had been broken have not been officially confirmed.

“The death of Giulio Regeni, who was tortured to death, is still opaque and shrouded in shadows,” said the opposition 5-Star party.

“We demand the truth.”