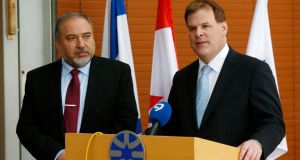 Israeli foreign minister Avigdor Lieberman and his Canadian counterpart in Jerusalem yesterday. Mr Baird’s country voted against Palestinian membership of the ICC; his car was pelted with eggs by protesters in Ramallah. Photograph: Ronen Zvulun/Reuters

Israel has reacted angrily to the decision by the International Criminal Court (ICC) to open an inquiry into possible war crimes in the Palestinian territories and is urging member states of the court to respond by cutting funds.

After emergency consultations involving senior officials, Israel decided to launch an international campaign against the ICC, saying it would do everything possible to undermine the inquiry.

Foreign minister Avigdor Lieberman described the court as an anti-Israel institution that embodies hypocrisy and grants a tailwind to terrorism.

“We will demand of our friends in Canada, Australia and Germany simply to stop funding it,” he said. “This body represents no one. It is a political body. There are a quite a few countries – I’ve already taken telephone calls about this – that also think there is no justification for this body’s existence.”

Prosecutors in the Hague announced on Friday that the preliminary examination would review “in full independence and impartiality” alleged crimes committed since June 13 last year, the beginning of tensions between Israel and the Palestinians that culminated in a 50-day war in Gaza that resulted in 2,200 Palestinian and 72 Israeli fatalities.

The announcement of the inquiry by the court’s chief prosecutor Fatou Bensouda came a few weeks after Palestinian president Mahmoud Abbas signed a statute formally accepting the jurisdiction of the ICC, although Palestine is only expected to formally join the body on April 1st.

The court prosecutes war crimes and other atrocities and the Palestinians want an investigation of Israeli actions during the Gaza war, which caused many civilian casualties, and also of Israeli West Bank settlement construction.

However, if the ICC decides to go ahead with an investigation it may also pave the way for Palestinians to be prosecuted for war crimes. Israel accused Gaza militants of deliberately firing rockets at civilian areas.

Palestinian foreign minister Riad Malki called the ICC’s decision a “historic event” and said the Palestinians would “co-operate as much as needed to see justice done and the crimes of Israel exposed, with those responsible being prosecuted.”

Hamas released a statement in Gaza expressing appreciation for the court’s decision.

“What is needed now is to quickly take practical steps in this direction and we are ready to provide [the court] with thousands of reports and documents that confirm the Zionist enemy has committed horrible crimes against Gaza and against our people,” spokesman Fawzi Barhoum said.

“We will fight it every way possible and we will also recruit others to fight this absurdity. We will not allow Israeli soldiers to face international tribunals,” he said.

Some Israeli legal experts predicted the ICC will not decide to press war crime charges because Israel has a well-respected independent judiciary that is already carrying out thorough investigations into the actions of the military during the Gaza conflict.

Washington said it was a “tragic irony” that the Jewish state, which had been hit by “thousands of terrorist rockets . . . is now being scrutinized by the ICC.”

The ICC enquiry is likely to feature prominently in tomorrows’s meetings in Jerusalem between Israeli leaders and visiting Canadian foreign minister John Baird.

During a visit to the West Bank city of Ramallah on Sunday, Mr Baird’s motorcade was pelted with eggs and shoes by angry Palestinian protestors.

Canada is considered one of Israel’s closest allies and voted against Palestinian membership of the United Nations and the ICC. Mr Baird said the ICC decision to open its preliminary examination was “deeply regrettable”.